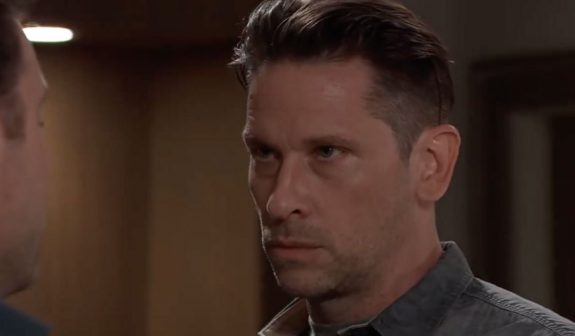 Carly tells Jocelyn they have to meet with the principal. Jocelyn goes onto the terrace and talks to Lucas Jones (Ryan Carnes). Lucas spent the night there because it was easier than going home. Jocelyn offers to talk to Lucas about it. Lucas talks to Jocelyn about getting drunk. Jocelyn brings up Brad. Lucas asks if Jocelyn thinks her life would have been better if her parents had stayed together. Jocelyn loves Sonny. Jocelyn used to fantasize about her parents but realized it wasn’t meant to be.

Carly and Jasper Jacks (Ingo Rademacher) vow to keep a united front when it comes to Jocelyn. Carly tells Jocelyn she should have come to them about this issue. Carly and Jax are disappointed in her. Jax brings up her kidney transplant. Jax tells her it was irresponsible. Jocelyn loses her phone and computer. Jocelyn starts to walk outside and Cameron is at the door. Carly tells Jax they can alternate where Jocelyn spends her time now.

Franco thinks back to his and Kim Nero’s (Tamara Braun) conversation at the meadow. Franco says staying in Port Charles is hurtful to Kim and she’s the only one he knows. Cameron tells him that he is hurting everyone there who loves him. Franco explains that he is trying to do the best he can. Cameron goes off on Franco and storms out. Franco asks if Cameron will be ok. Liz wants to know if it matters. Franco remembers his conversation with Kim. Franco tells Liz he is sorry. Liz and her family don’t deserve this. Franco says he will see Liz around and starts to leave. Liz kisses him before he does. Liz warns Scott of Franco’s plans. Scott and Franco meet.

GH Spoilers: Brad Tells Lucas That Julian Is Blackmailing Him

Julian demands Brad leave before Lucas loses his son. Brad goes to Lucas and tells him what happened with Julian. Lucas demands to know why Julian would want to break up their marriage. Brad plays the recording of Julian threatening him and asks if Lucas believes him now. Lucas wonders why his dad would do this. Brad suggests that Julian is having a breakdown too.

"I don't want my mother to know that I am alive." #GH pic.twitter.com/jnZFquOKwr

General Hospital’s Nik is out on the terrace, Jax questions why. Nik wants Valentin to know he’s coming for him. Jax gets Nik back inside. Jax tries to convince Nik that people will listen to Ava. Jax tells Nik it won’t be long before he gets caught. Nik tells Jax that he doesn’t trust Laura not to tip off Valentin. Nik asks about his mother. Nik looks up information about his mother online.

Of course, fans will have to tune in to General Hospital on the ABC network to find out what will happen next!