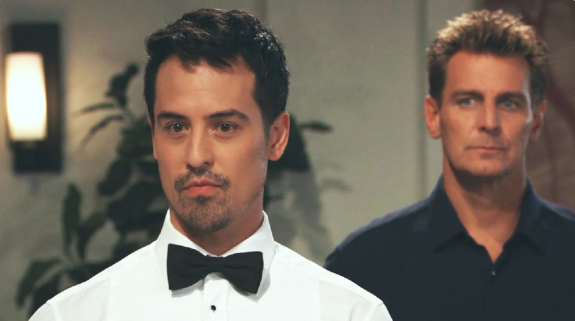 General Hospital (GH) spoilers for Wednesday, November 6, tease that Hayden Barnes (Rebecca Budig) will be committed to helping Hamilton Finn (Michael Easton). Now that he knows he’s a dad, he’s still feeling a bit overwhelmed. Finn will worry about facing Anna Devane (Finola Hughes), but Hayden will think they can figure everything out. They just have to put Violet Finn (Jophielle Love) first and make it work.

Over with Scott Baldwin (Kin Shriner), he’ll hope he can change “Drew Cain” aka Franco Baldwin (Roger Howarth) mind about bailing on Port Charles. “Drew” will be adamant about leaving town with Kim Nero (Tamara Braun), but Scott’s news could leave him shaken. There’s a good chance Scott will point out that Franco saved Drew from Jim Harvey (Greg Evigan) when they were kids.

Scott hinted that Franco did good before he did bad and mentioned that not everyone knows. This seems like the perfect opportunity to bring “Drew” in the loop and make him realize he owes Franco. At Elizabeth Baldwin’s (Rebecca Herbst) place, she’ll most likely tell Kim they have nothing left to talk about. Liz won’t seem interested in seeing Kim, who just showed up on her doorstep.

General Hospital Spoilers: Lucas And Julian Hash Out Their Differences – Hope For Father And Son

General Hospital Spoilers: Elizabeth Baldwin Is Losing Her Hubby No Matter What

However, Kim will think this discussion is long overdue. She’ll hope they can reach some form of peace and acceptance, but Liz is losing her hubby no matter what. Of course, things can change in an instant on General Hospital. Kim needs to keep that in mind!

At GH, Alexis Davis (Nancy Lee Grahn) will get a visit from Kendra Lennon (Michelle Argyris). Alexis’ sneaky personal trainer will put on quite a show. She’ll pretend to feel guilty about Alexis landing in the hospital and may suggest she shouldn’t have pushed Alexis so hard. Of course, Alexis has no idea Kendra is truly to blame for her medical crisis, so she’ll assure Kendra this isn’t her fault.

It won’t be long until Alexis’ health rapidly declines, so her family and friends’ concerns will grow. Over with Laura Webber (Genie Francis), she’ll keep trying to gain entrance to Jasper “Jax” Jacks’ (Ingo Rademacher) place. Laura is hoping someone’s inside, but she doesn’t know her back-from-the-dead son’s in there! Nikolas Cassadine (Marcus Coloma) will hide out until Jax ultimately shows up and saves the day. It looks like Nikolas’ secret will remain under wraps for now.

"I don't want my mother to know that I am alive." #GH pic.twitter.com/jnZFquOKwr

Other General Hospital spoilers say Cassandra Pierce (Jessica Tuck) will demand a better deal. She won’t be happy with the one Robert Scorpio’s (Tristan Rogers) offering, but the DA will insist it’s the only one Cassandra’s going to get. Meanwhile, Sam McCall (Kelly Monaco) will talk to Jason Morgan (Steve Burton) in the prison visiting area. She’ll contend that she doesn’t want any trouble and note that she’s had enough already.

That may be true, but Sam’s still got some Cassandra drama in her future. We’ll give you updates as other GH details and rumors emerge. Stay tuned to the ABC soap and don’t forget to check back often for the latest General Hospital spoilers, rumors, updates and news.