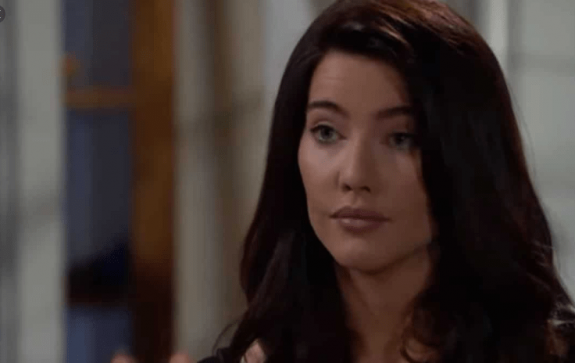 The Bold and the Beautiful spoilers for Wednesday, November 6, tease that Steffy Forrester (Jacqueline MacInnes Wood) will have some advice for her brother Thomas Forrester (Matthew Atkinson). As B&B viewers know, Steffy and Thomas haven’t been on good terms for a while now. Ever since Steffy learned about her brother’s involvement in keeping the secret about Beth Spencer (River Davidson and Madeline Valdez), she’s given him the cold shoulder and hasn’t wanted much to do with him.

On Wednesday’s B&B episode, it looks like Steffy will reach out to her brother with a big warning. Steffy has learned about how Brooke Forrester (Katherine Kelly Lang) had adoption papers drawn up so that Hope Logan (Annika Noelle) and Liam Spencer (Scott Clifton) could adopt Douglas Forrester (Henry Joseph Samiri), and she’s not happy about it.

Of course, Hope ended up ripping up those adoption papers, but she’s since had new ones drawn up that would allow just her to adopt Douglas. She’s currently in the process of trying to get Thomas to allow her to share custody of Douglas as his adoptive mother, but she’s got a hidden agenda. Hope wants to get joint custody now so that she can later petition the court for full and sole legal custody of Douglas. It’s a devious plan.

Bold And The Beautiful Spoilers: Will Thomas Forrester Listen To His Sister?

Well, it seems that Steffy will have some choice words for Thomas about what he should do going forward. According to B&B spoilers, she’ll tell her brother in no uncertain terms that he should not share custody of Douglas with Hope under any circumstances. Steffy can probably see the writing on the wall – that Hope is using Thomas and manipulating him to try to get Douglas away from him permanently, and she’ll try to dissuade Thomas from allowing that to happen.

We’ll see if Steffy has any luck in getting through to Thomas, but it looks like she probably won’t, considering that B&B spoilers say that Thomas will later meet with Hope at Forrester Creations to discuss her adoption of Douglas. According to B&B spoilers, Hope will come to Forrester with adoption papers in hand, but what she’ll find there will astonish her.

Hope will walk into a romantic setup – probably including flowers, champagne and the like. It will all be set up by both Thomas and Douglas, and Douglas will be present. That means that Hope may have to tread carefully and continue her ruse of being nice to Thomas for Douglas’ sake. At any rate, it will be a tricky situation for her to navigate, and from here things will get quite difficult for her.

Ongoing B&B spoilers indicate that the discussion that Hope thought she was going to have with Thomas over Douglas’ custody will turn into a situation where Thomas lays out more of his demands for what Hope must do in order for him to sign the adoption papers. And from here, B&B spoilers indicate that things will take a dangerous turn, which will all unfold later in the week.