The Young and the Restless Spoilers: Wednesday, November 6 – The Abbotts Welcome Theo – Simon Threatens Connor – Lola Walks Out On Kyle 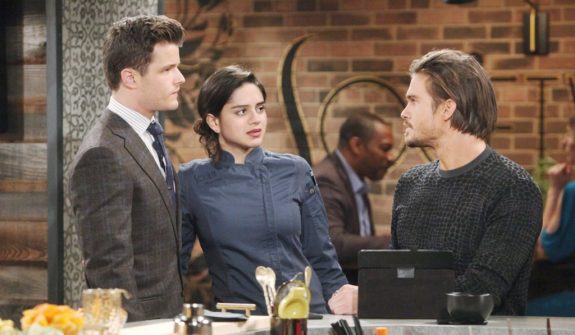 The Young and the Restless spoilers for Wednesday, November 6, tease that Traci Abbott (Beth Maitland) will suggest to Jack Abbott (Peter Bergman) that he slow down on plans to welcome Theo Vanderway (Tyler Johnson) to the family. But Jack will remain gung-ho on the idea of getting to know Theo and he’ll forge ahead with plans to host a party for him.

Jack will tell Traci about Theo’s visit with Dina Mergeron (Marla Adams) and Traci will agree that they should give Theo a chance, but that he must persuade Kyle Abbott (Michael Mealor). Jack will say that Kyle will have to find a way to accept all of this.

Meanwhile, at Society, Kyle will moan to Lola Abbott (Sasha Calle) about the party to welcome Theo into the Abbott family. Lola will tell him that he’ll have to deal with it.

Next on Y&R, Theo will see Mariah Copeland (Camryn Grimes) at Crimson Lights. He’ll tell her that he’s on the way to a family event and that he’s Kyle’s cousin. Mariah will figure out that this is what Kyle was upset about last night. She’ll leave Kyle a voicemail to call her.

Mariah will then sit with Sharon Newman (Sharon Case) on the patio and help her get ready for an upcoming exam. Tessa Porter (Cait Fairbanks) will then text Mariah to say she got them a room at The Grand Phoenix to continue their anniversary celebration. Soon, Mariah will leave and Rey Rosales (Jordi Vilasuso) will arrive to help Sharon study.

Young And The Restless Spoilers: Simon Black Issues A Threat

Chloe Mitchell (Elizabeth Hendrickson) and Kevin Fisher (Greg Rikaart) will then come in posing as FBI agents looking for Simon. They’ll talk with Chelsea, who will insist that she’s never heard of that person. Chelsea will then talk with Simon while Phyllis Summers (Michelle Stafford) sees. Simon will hold up a photo of Connor Newman (Judah Mackey) on his phone.

Chloe and Kevin will then regroup with Chelsea, and Phyllis will still be observing as Chelsea tells them that Simon made it personal, which was a big mistake. He threatened Connor, so now he burns. Meanwhile, Mariah and Tessa will kiss in their room, which is set up for a romantic interlude. And Phyllis will review security footage and wonder about Chelsea’s connection to Simon.

Next on Y&R, the get-together for Theo at the Abbott estate will get underway. Jack will instruct Lola, Abby, and Traci that they should all make Theo feel welcome. Theo will arrive and everyone will greet him warmly. Theo will approach Kyle and ask jokingly if he knows his from somewhere. Kyle will make a snarky reply, which will displease Lola.

The group will sit and talk, and Kyle will roll his eyes as Theo mentions working as a waiter at a restaurant near Traci’s publishing house. Lola will share a story about also waiting tables and Theo will say that they’d have made a great team. Kyle will reply with “wouldn’t you like that!” At that point, Lola and Kyle will step aside and Lola will say that she’s leaving and won’t be around him while he’s acting this way.

Kyle has a tough time welcoming Theo into the family while Chelsea protects her loved ones this week on #YR. You won’t want to miss it! pic.twitter.com/JhzQmeWpEt

Later, Theo will be asked about his influencer career, and he’ll talk about that and tell them that he had a fantastic childhood and that they don’t owe him anything. After Theo leaves, Kyle will wonder if Abby fell for any of that, but she’ll tell him to find someone else to complain to. Kyle will then call Summer Newman (Hunter King), who’s in Georgia, and advise her to come back to Genoa City to get control of Theo.

Young And The Restless Spoilers: Theo Vanderway Reaches Out To Summer Newman

Finally, on Wednesday’s new episode of Y&R, Theo will find Lola at Society and he’ll tell her that he’s no longer feeling lost. He’ll then call Summer and say that he’s dealing with something major and would like her to come back to Genoa City.