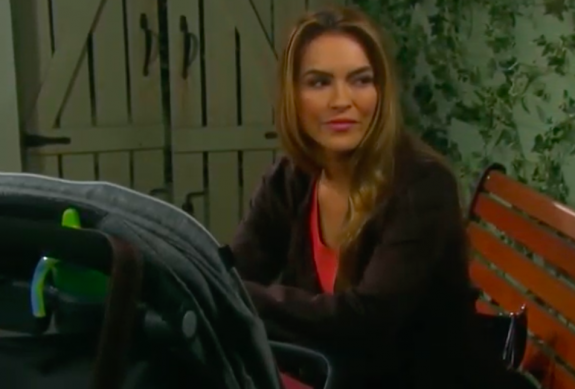 Days of Our Lives (DOOL) spoilers for Thursday, November 7, tease that Ben Weston (Robert Scott Wilson) will battle worries about his sister. He knows Jordan Ridgeway (Chrishell Hartley) is a serious threat, especially to Ciara Brady (Victoria Konefal). Ben would do anything to protect his love, even kill Jordan if he had to. He’ll fear he’ll have to do just that in Thursday’s gripping episode.

DOOL Spoilers: Ben Weston Will Battle Worries About His Sister

Ben will have another deadly nightmare involving Jordan’s grim fate. He’ll be a tortured soul on Thursday, but it doesn’t look like he’ll actually murder his sis. Even so, Ben will awaken next to a corpse before the week’s over. Days of Our Lives spoilers say some hot drama’s brewing, so don’t miss what’s in store.

Days of Our Lives Spoilers: Patch Is Back – Reunion With Kayla In The Works

Meanwhile, DOOL fans can expect a medical crisis for Kristen DiMera (Stacy Haiduk). She’s already suffered one, but this one could be far worse. Kristen will definitely fret about losing her baby – and her shot with Brady Black (Eric Martsolf). Speaking of Brady, he’ll get into a heated argument with Xander Cook (Paul Telfer). They’ll find plenty to clash about on Thursday, so some tense scenes are brewing.

Elsewhere, Nicole Walker (Arianne Zucker) will wonder if she should stay quiet about Sarah Horton’s (Linsey Godfrey) baby. She’s been keeping the secret so far, but she feels horrible about it. Nicole’s deceiving Eric Brady (Greg Vaughan) about his own child, so her guilt will leave her tempted to confess. Nevertheless, Nicole won’t divulge this shocking secret to the man she loves.

Days Of Our Lives Spoilers: Jack Deveraux Will Team Up With JJ Deveraux

Other Days of Our Lives spoilers say Jack Deveraux (Matthew Ashford) will team up with JJ Deveraux (Casey Moss). They’ll feel powerless now that Jennifer Horton’s (Melissa Reeves) lapsed into a coma, so searching for answers seems like a good idea. It’ll keep JJ and Jack from driving themselves crazy with concern for Jenn.

Jack will be desperate to get to the bottom of this. He’ll work with JJ to follow any clues that surface, but they may not find the right ones. Days spoilers say “Hope Brady” aka Princess Gina (Kristian Alfonso) will remain a free woman after the time jump. However, someone will definitely be locked up for Jennifer’s attempted murder. There’s a good chance it’ll be Eve Donovan (Kassie DePaiva), so some serious trouble’s ahead.

It looks like the action’s about to rev up in Salem. We’ll give you updates as other Days news and rumors emerge. Stick with DOOL and don’t forget to check back often for the latest Days of Our Lives spoilers, rumors, updates and news.