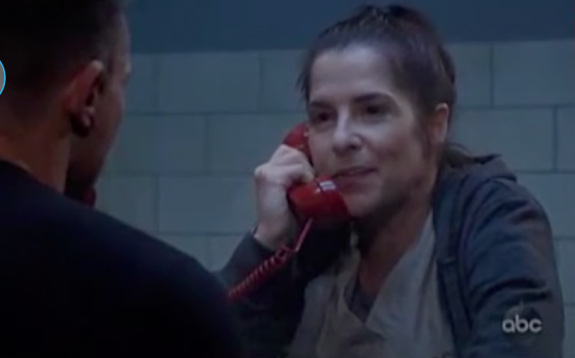 The kids are at Monica Quartermaine’s (Leslie Charleston), Jason is keeping them for the weekend. Jason tells Sam that her mom is in the hospital. Sam wants to know what happened. Jason tells Sam they are still running tests. Jason promises to get an update to Sam as soon as he can. Sam tells Jason that Cassandra Pierce (Jessica Tuck) is her cellmate. Sam tells Jason that Cassandra seems interested in her connection to the Cassadines. Sam is on work duty in the park and has to go.

Hamilton Finn (Michael Easton) arrives and tells Kendra and Julian he needs to run some tests. Finn runs the pressure tests. Alexis is losing sensation in her hands. Finn wants to go over the day Alexis got sick. Alexis tells Finn about the supplement she has been taking. Kendra tells Julian she’s going to stay behind to watch over Alexis. Kendra promises to keep Julian updated. Kendra doesn’t want Alexis to know that she hangs out at Charlie’s. Kendra wants to take Alexis for a walk. Alexis notices her hair is falling out.

General Hospital’s Violet Finn (Jophielle Love) thanks Hamilton Finn (Michael Easton) for saving her. Finn is still upset with Hayden Barnes (Rebecca Budig) for lying to him. Violet asks Finn if she can visit Roxie, he agrees. Hayden informs Finn they will be at her sister’s until she finds a house in Port Charles. Hayden wants Violet to be close to her father if that is what he wants. Violet runs into Robert on the way out of the hospital. Robert is shocked to see Hayden’s child.

Violet tells Robert she doesn’t have a daddy or a puppy. Finn tells Hayden that Violet needs one more test. Robert threatens to kick Finn’s butt for keeping this from Anna Devane (Finola Hughes). Finn tells Robert he just found out about Violet two days ago. Finn wants to tell Anna in person about his daughter. Robert wants to know if Anna is going to have a boyfriend when she returns. Finn tells Hayden he will deal with telling Anna. Hayden wants to talk when Finn is ready. Hayden sends Finn a baby picture of Violet. Hayden and Violet arrive home and she introduces her to Liz Baldwin (Rebecca Herbst).

General Hospital’s Laura Webber (Genie Francis) shows up at Jasper Jacks’ (Ingo Rademacher), Nikolas Cassadine (Marcus Coloma) almost answers the door. Laura goes back to the door asking if someone is there. Jax arrives and asks Laura to go with him for coffee. Laura agrees. Laura updates Jax on Ava’s condition. Meanwhile, Cassandra calls Nikolas from Pentonville. Cassandra threatens to give Nik up to Robert if he doesn’t do something. Cassandra demands Nik break her out of custody tonight or she will talk to Robert. Jax arrives and Nik asks about his mother. Nik cannot reveal himself until Valentin is neutralized.

General Hospital’s Kim Nero (Tamara Braun) arrives at Liz Baldwin’s (Rebecca Herbst) door saying they need to talk. Kim wanted to know how Liz is doing. Kim still considers Liz a friend. Kim wants to make peace with Liz. Liz tells Kim that the man she’s involved with is still married to her. Liz and Kim argue about Franco Baldwin (Roger Howarth). Kim wants Liz to accept the fact that the judge sided with Franco and not her. Kim thanks Liz for being there for her and leaves.

General Hospital’s Franco and Scott Baldwin (Kin Shriner) meet at Oscar’s Meadow. Franco tells Scott he and Kim are leaving town. Scott talks about children he has lost. Scott believes he can add Franco to that list. Scott talks about how Drew Cain (Billy Miller) saved Franco from his adoptive mother’s boyfriend. Scott doesn’t believe Franco should die to give Drew another second chance.

Some very sweet scenes are coming up on General Hospital, so stay tuned every weekday on ABC! And don’t forget to check back here regularly for all your General Hosptial news, information and spoilers!