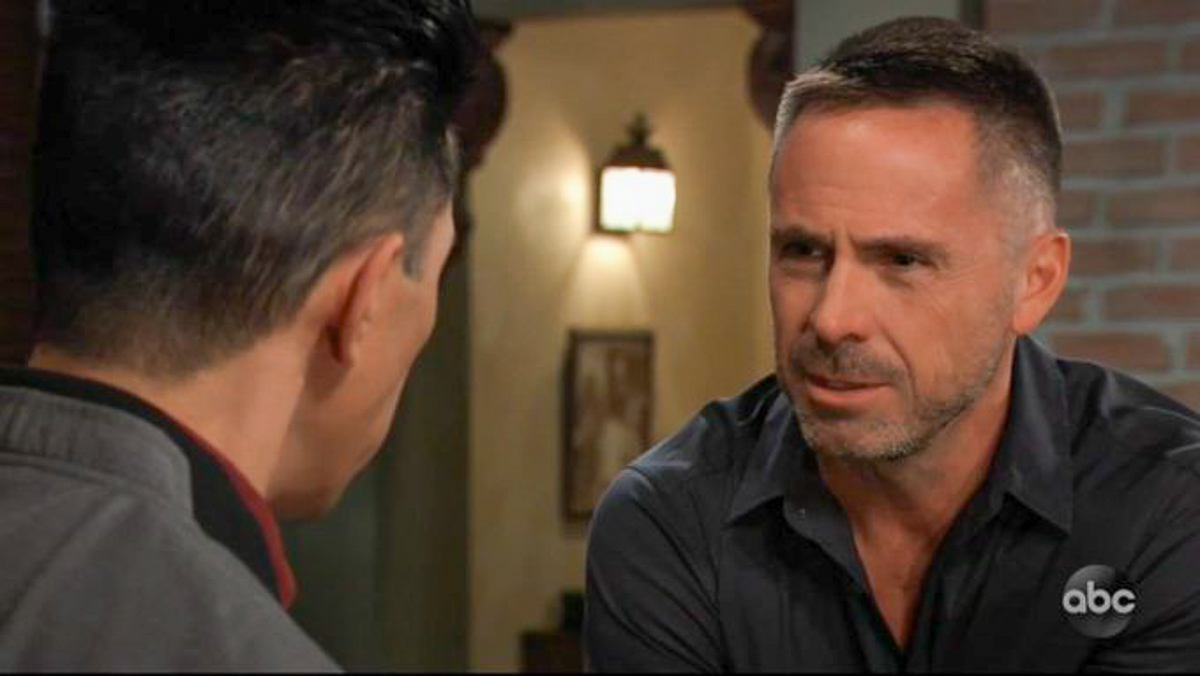 General Hospital (GH) spoilers tease that Brad Cooper (Perry Shen) supposedly has a secret admirer, but as revealed this week, it seems that Julian Jerome (William DeVry) is sabotaging Brad and Lucas Jones’ (Ryan Carnes) marriage. But what is Julian really up to? Is he trying to break up his son’s marriage or is he just trying to teach a lesson? Or is Julian planning something more sinister? Let’s take a look and see what his motive likely is.

Up until recently, Julian and his son-in-law got along fairly well. After the baby swap, Brad needed a confidant, but he left out some of the most important information. Brad and Lucas’ adopted son died the day he was brought home from the hospital. Brad ended up running in to Nelle Benson (Chloe Lanier) who had just given birth.

Nelle’s baby was perfectly healthy but she wanted to make sure Michael Corinthos (Chad Duell), the baby’s father, didn’t end up with the baby while Nelle was in prison. She wanted to make Michael pay. Brad didn’t tell Julian to true identity of the baby, which puts Julian in Sonny Corinthos’ (Maurice Bernard) orbit. Julian has left the mob and has maintained a mostly cordial relationship with Sonny recently. All Brad told Julian that it was a random woman.

When Leisl O’Brecht (Kathleen Gati) blackmailed Brad, he went to Julian for help. He practically insisted that Julian murder Dr. O’Brecht and Julian almost did it, but he stopped himself from committing cold blooded murder. At this point, Julian told Brad that it was his problem, that we wouldn’t be dragged into Brad’s problems. But now that Julian knows the whole truth about baby Wiley Cooper-Jones, he is probably looking for a little payback as well as keep Brad under his control.

It’s doubtful that Julian wants Brad and Lucas to break up as long as the baby swap remains a secret. Julian knows that Brad would absolutely have no problem making sure that everyone know about Julian’s knowledge of the secret. Julian wouldn’t want to lose the progress he and Lucas have made as father and son.

Not to mention that once Sonny finds out that Julian knew that Michael’s son was being kept from him, he may very well send Jason Morgan (Steve Burton) to end Julian’s life. It’s more likely that he is just exerting his power over Brad.

Julian was adamantly against Brad and Lucas going to couple’s therapy with Neil Byrne (Joe Flanigan). Julian is concerned that Brad will let something slip to Neil. Since Neil is currently dating Alexis Davis (Nancy Lee Grahn) and Julian doesn’t want his ex to find out Julian’s involvement, he doesn’t want Brad talking to Neil. So this may just very well be Julian showing Brad that the can always find a way to ruin him and keep him in line.

Julian also made a comment about Brad acting oddly to Willow Tait (Katelyn MacMullen). About the stress that Brad seems to be under. Is he trying to make it look like Brad is suicidal? Could Julian be planning to murder Brad before Brad’s drama comes out? Julian said that wasn’t his life anymore but Brad has put him in a tight spot, perhaps Julian just wants Brad out of the way. Why else go out of his way to mention Brad’s behavior to Willow?

Is Julian just trying to break up Brad and Lucas’ marriage? Or does he have something more sinister in mind? Could he be planting the seeds that Brad is suicidal? Is he planning to murder his son-in-law to make sure that Julian’s part in the baby swap is kept hidden? What will Julian do next? Some treacherous scenes are coming up on General Hospital, airing weekdays on ABC! And don’t forget to check back right here often for all your General Hospital news, information and spoilers!