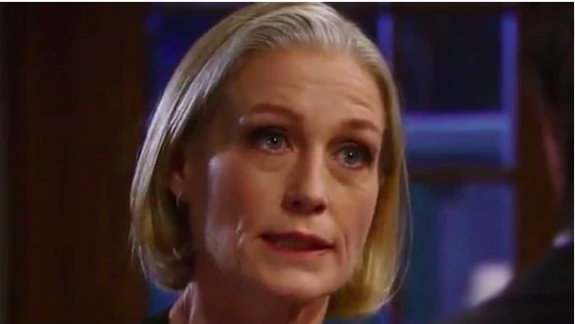 General Hospital (GH) spoilers for Thursday, November 7, tease that Valentin Cassadine (James Patrick Stuart) will seem agitated. It won’t take Nina Reeves (Cynthia Watros) long to notice, so she’ll push Valentin to share what’s bothering him. Valentin will point to Jasper “Jax” Jacks (Ingo Rademacher) as the source of his concerns. He’ll have a nagging feeling that Jax is plotting something, so he’ll definitely want to stay on guard.

Nina will also head to Nathan West’s (Ryan Paevey) grave on Thursday. She’ll probably have a few things to get off her chest, so deceased Nathan is the perfect person to keep her secrets. Speaking of secrets, Jax will worry Nikolas Cassadine (Marcus Coloma) is going to expose his own. It looks like Nikolas will plan on venturing out in the world, but Jax won’t think that’s a very bright idea.

However, Nikolas will be adamant that the odds of him getting recognized as nonexistent. Perhaps Nik will have a destination in mind where no one knows him. He could also opt for another disguise. Whatever the case, Jax will remain concerned about Nikolas’ next move.

Josslyn Jacks (Eden McCoy) will have a move in mind on Thursday as well. She’ll let Jax know she’d like to live with him, but what about Jax’s houseguest? Jax can’t exactly let Josslyn stay there as long as Nikolas is around, so he may hold off her move-in and raise red flags.

GH fans know Jax already raised a few of those with Carly Corinthos (Laura Wright), who’ll be summoned for a crucial chat. Jax may bring up Josslyn’s desire to move in his place, but he’s bound to stir up more suspicions if he shuts this down. General Hospital spoilers say Carly will learn a shocker in the coming episodes, so she should be brought in the Nikolas loop eventually.

In the meantime, Carly will have some kind words for Sasha Gilmore (Sofia Mattsson). Sasha will still be beating herself up for her mistakes, but Carly will actually praise Michael Corinthos’ (Chad Duell) girlfriend. She’ll note that Sasha’s owning up to what she did, and that goes a long way with this protective mom.

Other General Hospital spoilers say Cassandra Pierce’s (Jessica Tuck) confidence will turn to panic. She’ll realize that by threatening Nikolas, she may have set a deadly trap for herself. Cassandra was hoping to escape through this work detail opportunity, but she’ll grow nervous about the outcome soon enough.

Sam McCall (Kelly Monaco) will see that Cassandra’s perturbed, so she’ll wonder what’s going on. When Sam asks if Cassandra’s afraid one of her enemies will come after her, she’ll be spot-on about Cassandra’s worst fear.

At Pentonville, Nelle Benson (Chloe Lanier) will meet with her attorney again. Martin Gray (Michael E. Knight) will get updates on a “guy of dubious distinction,” so he’ll be curious who that is. Nelle will look pleased with herself as she gets ready to spill. Will this involve Ryan Chamberlain (Jon Lindstrom) or perhaps some old Shiloh Archer (Coby Ryan McLauglin) dirt? Could Cassandra have let something slip about Nikolas inadvertently? That last one doesn’t seem too likely since Cassandra’s been careful, but you never know.

Regardless, Nelle may hope her new tactic is a quick ticket to freedom – or at least cushier conditions. We’ll keep you posted as other GH news and rumors emerge. Stick with the ABC soap and don’t forget to check back often for the latest General Hospital spoilers, rumors, updates and news.