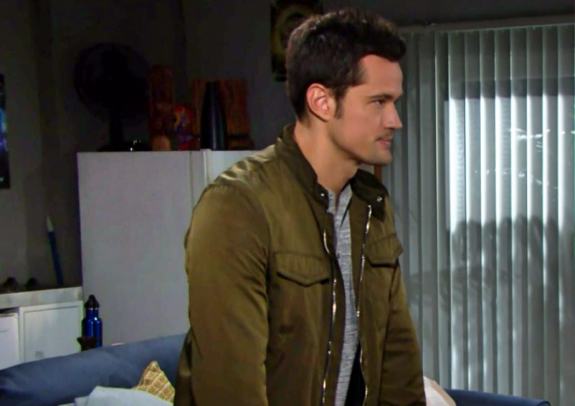 The Bold and the Beautiful spoilers for Thursday, November 7, tease that Hope Logan (Annika Noelle) will be in for a rough night. As B&B viewers know, she’s just arrived at the Forrester Creations CEO office to meet Douglas Forrester (Henry Joseph Samiri) and Thomas Forrester (Matthew Atkinson) for a “family” dinner. Thomas and Douglas arranged the whole thing, complete with a romantic setup and candles.

Thomas urged Hope to bring the adoption papers with her, giving her hope that he might sign the paperwork that evening. But it seems that he’ll have some additional plans as well. It’s not going to be that easy for Hope to get her papers signed, as B&B spoilers say that Thomas will play on Hope’s vulnerabilities and offer up more quid pro quo. In other words, he’ll want something or things in exchange for signing the adoption papers.

As B&B viewers know, Thomas previously had asked Hope to sleep with him in exchange for him allowing her to adopt Douglas. Hope didn’t agree to that arrangement, but it’s not clear that Thomas has given up on that dream, so he might reiterate the request. Or, he might have other demands of Hope – such as agreeing to spend time with him and Douglas after she signs the papers. Whatever the case, he’ll have specific terms in mind.

Bold And The Beautiful Spoilers: Danger Lurks At Forrester Creations

We’ll see how things unfold on Thursday’s episode, but it seems that the show is building toward some explosive drama, since viewers recently learned that Jack Maclaine (Todd McKee) has a big cleaning project going on in the Forrester Creations building involving a huge open vat of hydrochloric acid. Charlie Webber (Dick Christie) has promised that the area has been cordoned off and no one is in danger, but given that Hope, Thomas, and Douglas are all in the building alone, it looks like something dangerous is brewing.

Bold And The Beautiful Spoilers: Brooke Makes It Easy For Shauna To Steal Ridge https://t.co/kSZhEucvNp pic.twitter.com/MLVSqJvDbz

Next, on Thursday’s new B&B episode, Ridge Forrester (Thorsten Kaye) will spend some time with Shauna Fulton (Denise Richards). As B&B viewers know, these two have been growing closer lately, and they even shared a big smooch on Halloween evening. On Thursday’s episode, it looks like they’ll chat over drinks and Ridge will open up about some of the things that have been troubling him lately.

We’ll see exactly what Ridge says, but it’s clear that he’s attracted to Shauna. He’ll likely admit that, which should make Shauna happy. It looks like Shauna won’t push Ridge too hard to become involved with her romantically right now, as it seems like she might be able to get closer to him simply by acting as his confidante and his friend.