The Young and the Restless Spoilers: Thursday, November 7 – Billy’s Headed To The Dark Side Again – Lola & Kyle Make Up – Jack Give Theo Abbott Family Info 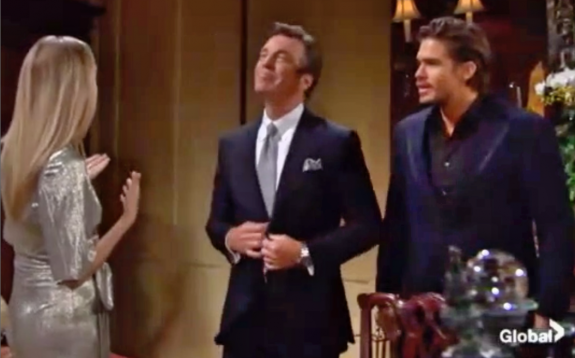 Next on Y&R, Victoria Newman (Amelia Heinle) and Billy Abbott (Jason Thompson) will discuss the situation with Katherine Chancellor’s (Jeanne Cooper) will and how Devon Hamilton (Bryton James) gave Cane Ashby (Daniel Goddard) his money. Billy will be angry and will have a sense that Cane is conning Devon somehow. Victoria will worry about his anger over the situation, but Billy will downplay the issue and will tell him that she lowers his blood pressure.

Later, Nikki will talk with Victoria, who will admit that Billy seemed angry over the issue with Katherine’s will. Nikki will hear all the details about the will contestation issue. Victoria will worry that it is triggering Billy’s pent-up frustration. Nikki will share that she knows that Billy tried to run down Adam Newman (Mark Grossman) with his car. Victoria will explain that Billy had a break from reality, but that he’s healing. Nikki will advise her not to shrug off her concerns.

Meanwhile, at Crimson Lights, Theo will be discouraged when someone rejects his agency for a bigger agency. He’ll look at his father’s pocket watch and remark that nothing comes easily. Jack will then call, and Theo will pretend to check his schedule, then agree to meet him at Society later.

Young And The Restless Spoilers: Kyle Abbott Offers An Apology

Next on Y&R, at Kyle and Lola Abbott’s (Sasha Calle) apartment, Kyle will make breakfast for Lola and present her with a flower to make up for what happened at the welcome party for Theo at the Abbott estate. They’ll make up and discuss how Theo arrived in Genoa City and tried to come between them. Lola will want Kyle to keep an open mind about Theo, but he’ll be doubtful.

Y&R Spoilers: Theo Vanderway Gets Info On The Abbott Family

Later, Theo will meet with Jack at Society and they’ll discus Kyle’s behavior the evening before. Jack will say that their family fights, but that they always show up. Jack will tell him about his grandfather Stuart, and Theo will remark that he feels he’s more like Dina. Jack will tell Theo about Dina’s restlessness and how she left the family, as well as about her successes.

Lola will spot Jack and Theo talking and will be pleased. Jack will then give Theo a file with information about his family and his dad’s adoption papers. Jack will tell Theo that his door is always open, whenever he’s ready. Jack will leave, and Lola will join Theo, who will remark on Kyle’s anger last night. Theo will think that Kyle has a problem with Lola being around him, but Lola will say that she makes her own decisions about people.

Lola and Theo will bond over their similar pasts and hustling for everything they got, and Lola will suggest that he just be himself and show the Abbotts who he is. Afterwards, Theo will read information about the recent Jabot merger.

Next on Y&R, at Jabot, Billy will tell Kyle that he sympathizes about Theo and that he’s suspicious of him, too. Billy will even wonder if Theo actually targeted Kyle in New York, but Kyle will doubt it. Billy will advise him to keep up his guard.

Billy will bring up Cane’s con in the past and will mention that he’s doing it again. Kyle will assure Billy that he knows exactly who Theo is. Billy will suggest that he keep his distance from Theo and try to get through to Jack so that Theo can’t take advantage like Cane did. Billy will state that Theo is more than a nuisance; he’s a threat.

Finally, on Thursday’s new episode of Y&R, once he’s alone, Billy will pull out a piece of gum, then throw it out.