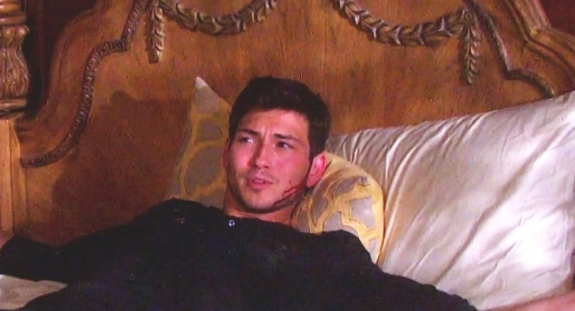 Days of Our Lives (DOOL) spoilers for Friday, November 8, tease that a horrifying discovery is on the way for Ben Weston (Robert Scott Wilson). He’ll find a corpse, and it looks like it’ll be his own sister’s. While Ben wraps his head around Jordan Ridgeway’s (Chrishell Hartley) fate, Nicole Walker (Arianne Zucker) will have a tense discussion with Sarah Horton (Linsey Godfrey). They’ll debate Sarah’s pregnancy and whether Eric Brady (Greg Vaughan) should know the truth.

Sarah will insist Nicole needs to keep her mouth shut and move on with her life. She won’t want Nicole creating baby chaos, but Nicole will remain concerned about the secret. At the chapel, Days of Our Lives spoilers say Kristen DiMera (Stacy Haiduk) will have a bombshell to pass along. She’ll give Eric some shocking news, so will she fill him in on Sarah’s unborn child?

While Kristen rocks Eric’s world, “Hope Brady” aka Princess Gina (Kristian Aflonso) will be interrupted. She was hoping to smother Jennifer Horton (Melissa Reeves) and prevent any chance of the truth getting out, but it seems Ciara Brady (Victoria Konefal) will derail that plan. Since Ciara just arrived at the hospital, there’s a good chance she’ll walk in before Princess Gina can do the deed.

Of course, Princess Gina can just act like she was simply adding another pillow for Jennifer. Days of Our Lives spoilers say Ciara may be suspicious at first, but Princess Gina will manage to smooth things over and throw Ciara off the trail.

Days Of Our Lives Spoilers: John Black And Marlena Evans Have A Celebration

Over with John Black (Drake Hogestyn) and Marlena Evans (Deidre Hall), they’ll have a sweet celebration for their one-year anniversary. Friday also happens to be DOOL’s 54th anniversary, and you’ve probably heard about the time jump to honor it. We’ll explain how the twist is set to go down. As Jack Deveraux (Matthew Ashford) frets about Jennifer, he’ll get some advice and support from “Jarlena.”

During this pep talk, Jack will receive an hourglass that helped John cope when Marlena was in a coma. John will explain that he used it to get through the crisis, so Jack will use it, too. He’ll flip it and remember to take things on step at a time. When Jack turns the hourglass over, it’ll suddenly be one year later in Salem!