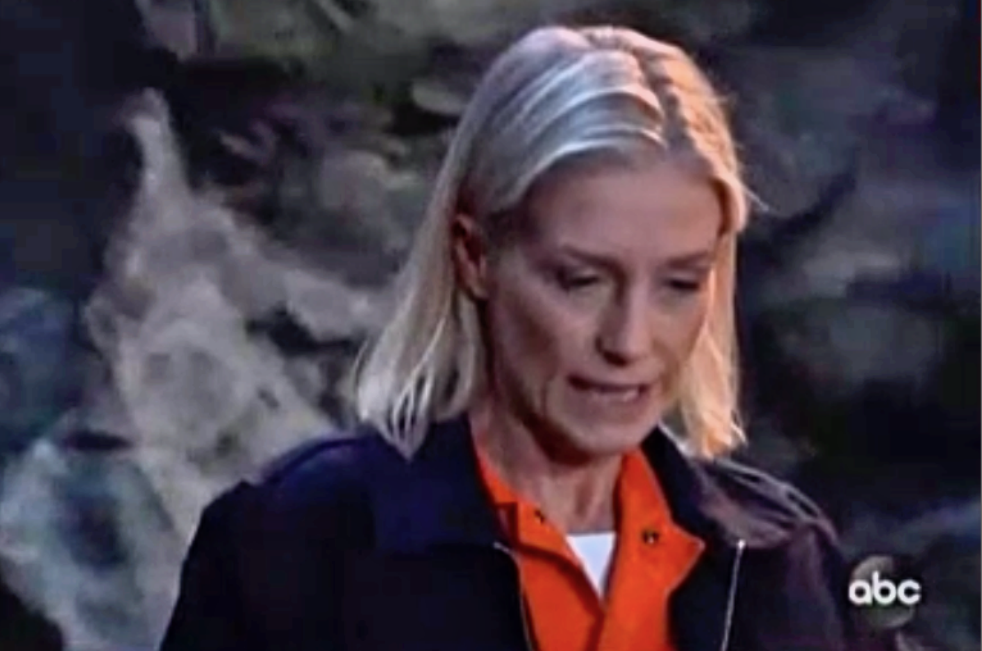 Cassandra Pierce (Jessica Tuck) complains that Sam gets to speak to Curtis. Curtis tells Sam that Cassandra has a lot of enemies out there. Sam is called away from Curtis because of Cassandra’s complaints. Sam asks Cassandra if she is afraid one of her enemies will get her.

Sam goes back to work and she and Cassandra argue. Nikolas Cassadine waits for Cassandra to make her move. Cassandra knocks out the guard after pretending to spring her ankle. Sam yells for help as Cassandra runs to Nik. Nik takes Cassandra the back way so no one will ever find her. Meanwhile, Sam calls for help.

General Hospital’s Jax wants Nikolas Cassadine (Marcus Coloma) to leaves. The doorbell rings and Nik disappears. Jocelyn Jacks (Eden McCoy) comes to visit. Jax wants to know why Jocelyn is really there. Jocelyn wants to move in with him. Jocelyn tries to convince Jax to let her move in with him. Jax wants to know if Jocelyn’s mom knows she’s there. Carly Corinthos (Laura Wright) arrives and Jocelyn tells Carly she needs a break from everything Oscar Nero (Garren Stitt).

Carly understands Jocelyn’s concern. Jocelyn thinks living there could help her move on. Jax doesn’t want Jocelyn to use this as a place to hide. Jax tells Jocelyn that Oscar would want her to move on with her life. Carly and Jax tell Jocelyn this is normal. Jocelyn agrees that she’s making progress. Jocelyn is lucky to have so much support. Carly suggests Jocelyn spend weekends with Jax. Jocelyn says she can wait until the house is finished. Jax takes them upstairs to see Jocelyn’s room.

General Hospital’s Carly has Wiley Cooper-Jones (Theo and Erik Olson) at Kelly’s. Michael Corinthos (Chad Duell) and Sasha arrive. Michael and Sasha are waiting to meet Curtis. Jax calls Carly to come talk to him and Jax. Carly wants to take Wiley to the housekeeper. Michael and Sasha volunteer to keep him. Carly assures Sasha she is ok with her.

Wiley and Sasha color while Michael secures his car seat. Sasha says Charlotte Cassadine (Scarlett Fernandez) is Valentin’s saving grace. Curtis pushes for answers from Sasha. Curtis tells Sasha about the new DNA test. Curtis says he thinks the DNA samples were manipulated. Curtis says Valentin is the only person who could pull this off. Curtis needs Sasha to tell him he’s wrong. Curtis wants to know what Nina is up against. Sasha thinks Curtis has good intentions but Nina has been through enough. Sasha wants to have her life and let Nina and Valentin have theirs.

General Hospital’s Martin Grey (Michael E. Knight) is visiting Nelle Benson (Chloe Lanier). Nelle asks if Martin found out about her husband, he did. Nelle says she recently got married. Martin says her husband’s name isn’t on file and asks why he wasn’t at the hearing.

Martin asks who Nelle is married to. Nelle wants a new parole hearing. Martin isn’t sure he is going to represent her. Nelle offers Martin money to get her out of jail. Martin agrees that Nelle would be a wealthy woman when she gets released. Nelle tells Martin they have to act fast or the pot of gold would be gone. Martin agrees to represent Nelle. Martin later calls Valentin saying a new avenue just opened up.

So stay tuned every weekday on ABC! And don’t forget to check back here regularly for all your General Hosptial news, information and spoilers!