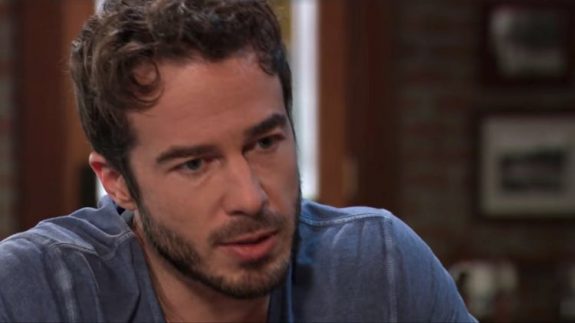 General Hospital (GH) spoilers for Friday, November 8, tease that Lulu Spencer (Emme Rylan) will catch up with Maxie Jones (Kirsten Storms), so she’ll undoubtedly learn Peter August (Wes Ramsey) is moving in with her bestie. Lulu will suggest that it’s about time! Of course, she may be talking about something besides Peter’s big move, but this couple’s living arrangements will surely come up regardless.

GH Spoilers: Lulu Spencer Will Catch Up With Maxie Jones

Over with Sam McCall (Kelly Monaco), she’ll be told to freeze and put her hands where the cops can see them. Harrison Chase (Josh Swickard) will arrive at the park with backup, so Sam will explain Cassandra Pierce’s (Jessica Tuck) latest shocker. It’s not like Sam would smack the guard and stay put, so Chase will surely buy the story – especially since Cassandra has made her escape.

Of course, Cassandra could be headed for a grim fate if Nikolas Cassadine (Marcus Coloma) gets his way. Nikolas clearly has darker plans than Cassandra intended! The question is: Will Nikolas actually succeed in murdering Cassandra or will this plot go awry? Whatever the case, Jason Morgan (Steve Burton) will get a disturbing phone call and investigate for Sam’s sake soon.

Other General Hospital spoilers say Jasper “Jax” Jacks (Ingo Rademacher) will pay Ava Jerome (Maura West) a visit at Shadybrook. He’ll insist what happened is his fault and do his best to explain. Will Jax drop the Nikolas bomb and push Ava to help them keep up the charade? Ava will lash out at Jax on Friday and argue that she won’t be taken advantage of. She may put up a fight once Jax comes clean.

It’s understandable that Ava would be furious over all this. After all, she thought she was nuts and voluntarily institutionalized herself! Even so, this is a chance for Ava to make amends for recanting her statement against Valentin Cassadine (James Patrick Stuart). Jax may also urge Ava to keep quiet for Spencer Cassadine’s (Nicolas Bechtel) sake, and Ava certainly has a soft spot for the kid.

Nevertheless, Ava has her own kid to worry about. She won’t want Sonny Corinthos (Maurice Benard) using her mental breakdown – which she obviously didn’t have – against her. Ava might tell Jax that if he can guarantee she won’t lose contact with Avery Corinthos (Ava and Grace Scarola), she’ll stay tight-lipped.

At GH, Bobbie Spencer (Jacklyn Zeman) will clash with Julian Jerome (William deVry). It seems she’ll be at least partially in the loop on Julian’s latest stunt. Bobbie may not know the details, but she might know enough to blast Julian for hurting Lucas Jones (Ryan Carnes). She’ll contend that only one man will ever really be Lucas’ father and that’s Tony Jones (Brad Maule), Lucas’ adoptive dad.

Tony has passed on, but Lucas will visit the cemetery and miss him on Friday. He’ll wish he could talk to Tony, and that wish will soon be granted. General Hospital spoilers say Tony will appear in spirit form to offer comfort and guidance.

Across town, Willow Tait (Katelyn MacMullen) will offer comfort and guidance as well. She’ll chat with Brad Cooper (Parry Shen) and perhaps reassure him about smoothing things over with Lucas. Willow will even defend Julian by suggesting he only wants what’s best for “Wiley Cooper-Jones” (Erik and Theo Olson). Unfortunately, Julian has made some bad decisions right along with Brad.

Back with Lulu and Maxie, they’ll be joined by Charlotte Cassadine (Scarlett Fernandez). General Hospital spoilers say Maxie, Lulu and Charlotte will enjoy some dessert, but trouble’s brewing. Based on info for next week, it sounds like danger is ahead. We’ll give you updates as other GH news and rumors emerge. Stay tuned to the ABC soap and don’t forget to check back often for the latest General Hospital spoilers, updates and news.