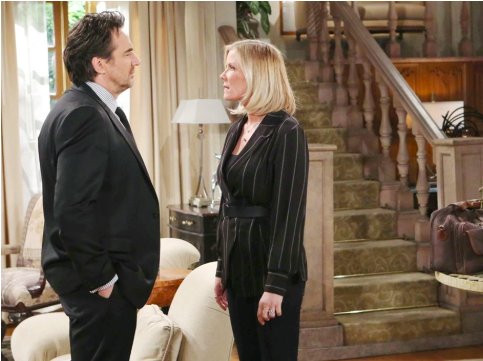 The Bold and the Beautiful spoilers for Friday, November 8, tease that Ridge Forrester (Thorsten Kaye) and Brooke Forrester (Katherine Kelly Lang) will find themselves in the middle of a huge argument. As B&B viewers know, these two have been fighting a lot lately, and on Friday’s episode their argument will be over familiar issues – their children.

B&B Spoilers: Ridge Forrester Suspects Hope Logan Is Up To Something

Ridge recently told Shauna Fulton (Denise Richards) that he’s concerned about how nice Hope Logan (Annika Noelle) has been to Thomas Forrester (Matthew Atkinson) lately. He was unnerved when Hope showed up to the Forrester Halloween party – something that seemed uncharacteristic of her. She claimed it was for Douglas Forrester’s (Henry Joseph Samiri) sake, but Ridge suspected that something else was going on.

The Bold and the Beautiful Spoilers: Hope Feels Guilty About How She Ended Things with Thomas

Of course, B&B viewers know that Hope is trying to use Thomas’ feelings for her to convince him to sign papers giving her joint custody of Douglas. She’s playing a dangerous game where she’s allowing Thomas to believe that they might have a future together as loving co-parents of Douglas, when in reality her plan is to first get joint custody, then go after full custody of the little boy.

Bold And The Beautiful Spoilers: Bridge Have A Fierce Argument

Well, on Friday’s B&B episode, expect a major fight between Brooke and Ridge over Hope’s right to become a legal guardian of Douglas. It seems that Ridge will voice his suspicions over what Hope is up to, and of course Brooke won’t want to give up Hope’s actual plan. But they will get into it over Thomas’ fitness to be a parent, and Brooke probably won’t hold back, since she usually doesn’t.

Meanwhile, on Friday’s new episode of B&B, Hope will wait as Thomas is poised to sign the adoption papers. As B&B viewers know, she is hoping to become Douglas’ adoptive mother so she can have joint custody of him. Then, after she has joint custody, she plans on petitioning the court to get full custody of Douglas. It’s a devious plan.

Well, according to B&B spoilers, Hope will ultimately become Douglas’ adoptive mother, so it appears that Thomas will sign the papers. Hope will probably breathe a sigh of relief once she sees Thomas’ signature on the papers, but she’ll also have something else on her mind, since she doesn’t know where Douglas is.

As B&B viewers know, there’s a big vat of hydrocholric acid that Jack Maclaine (Todd McKee) and his team have been using to clean some of the industrial equipment in the building. Charlie Webber (Dick Christie) promised Ridge that he’d keep the area roped off and safe, but clearly there’s a reason why B&B viewers have seen this dangerous scene several times.

The Bold and the Beautiful Spoilers: Ridge Finds Out About Thomas and Hope’s Intimate Deal – Father Furious https://t.co/6yGCOsa4cE pic.twitter.com/6hTVK2ORBi

On Friday’s episode, the situation between Hope and Thomas will take a turn for the worse, as Hope goes on a frantic search of the building. It looks like she’ll be searching for Douglas, and that Thomas won’t tell her where the little boy is. Hope will scream at Thomas for being a monster, so clearly the mood between the two of them will have taken a bad turn.

Exactly what happens from here remains to be seen, but there should be some big events occurring on Friday’s episode. B&B spoilers indicate that someone will be in terrible danger, and it looks like that person could be Thomas, since ongoing B&B spoilers point to Thomas being missing in subsequent episodes. We’ll see what happens on Friday’s episode, but there should be some explosive drama, so stay tuned!