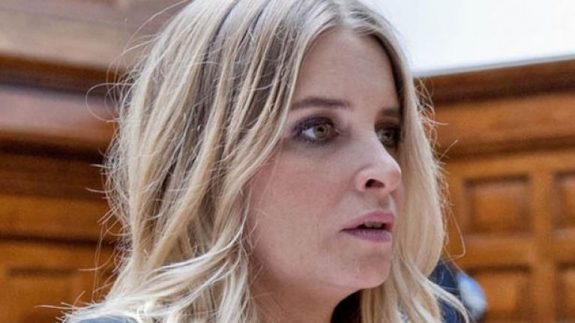 Emma Atkins, also known as Charity Dingle on “Emmerdale,” said her character will be left devastated after her split with Vanessa Woodfield (Michelle Hardwick). Spoilers reveal that the pair will split after Charity continues to deny her involvement in a casino heist with Mandy Dingle (Lisa Riley) and Vinny Dingle (Bradley Johnson).

Atkins said, “When Vanessa says that it’s over, I don’t think Charity quite believes it at first. But Vanessa then snaps at the pub and tells everyone what Charity has been up to.”

“Everyone looks down at her. She’s been spending money, but the cash was supposed to go towards paying Lydia back. It’s such a tangled web and Charity gets herself in such a state,” she continued.

Atkins added that her alter ego felt like she’s wearing the trousers. “She thinks she can pull Vanessa round from this,” she said.

The problem is that Vanessa has been lied to in the past and she no longer wants to be betrayed. For her once the damage has been done, there’s no turning back.

Charity will eventually realize that her wrongdoings have cost her Vanessa. She’ll no longer have someone to turn when she’s facing a crisis like when Moses goes missing.

Atkins continued that Vanessa is Charity’s “true love.” Her alter ego knows deep down that the right thing to do is give Vanessa some space but because of her “innate selfishness,” she won’t be able to do so.

The actress said Hardwick’s great to work with. She added that there are several layers to their relationship and she’s having fun with it.

Emmerdale Spoilers: Charity and Vanessa Get Back Together?

“It’s quite nice when they split up, as there’s a lot of hurt and avenues to explore there,” she said.

“Together they’re great, but they’re good as individual characters anyway. It just depends on what the writers decide to do. That’s never in our control, our destiny is given to us,” she continued.

She hopes that her character won’t forget her true self. “A lot of the viewers like those elements of mischief and they have to remain. Vanessa finds that attractive even though she doesn’t want to admit it,” she explained.