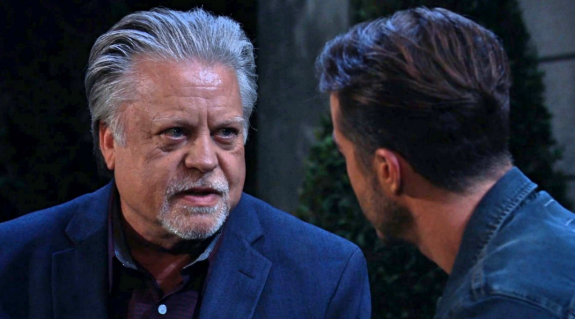 Jason calls for help for the guard. Harrison Chase (Josh Swickard) arrives with another cop. Chase pulls a gun on Sam. Jason pulls Sam to him and explains that he is the one who called the cops. Sam tells Chase that Cassandra escaped. Chase wants Sam’s statement and then an explanation as to why Jason is there. Sam tells chase there was a white van waiting on Cassandra and a man was driving it.

General Hospital’s Cassandra and Nikolas Cassadine (Marcus Coloma) are driving around in what seems to be circles. Cassandra wants to get out of town and then continue their relationship from a distance. Nik tells Cassandra she dissolved their partnership.

General Hospital’s Jasper Jacks (Ingo Rademacher) arrives to visit Ava Jerome (Maura West). Jax tells Ava that what happened is his fault. Jax says Crimson should have kept a closer eye on the boards. Ava says the posted showed her complete hatred. Ava tells Jax that isn’t why she is there. Ava says she is being haunted by restless souls. Ava asks Jax if he believes they can awaken the dead. Ava believes she is being haunted by Nikolas. Jax asks Ava if anyone else saw Nik.

Ava says she and Nik had formed a special bond. Lulu says Nik wants to punish her for staying quiet about what Valentin did to Nik. Ava tells Jax why she stayed silent. Jax thinks she made the right call. Jax asks why Ava thinks this is happening now. Jax asks if Ava saw something that reminds her of the Cassadines. Ava tells Jax about Laura calling him that night. Ava realizes that Jax is after Helena Cassadine’s (Constance Towers) portrait. Ava trusted him once and will never do that again. Jax promises to be back when Ava feels better. Ava tells him he will never find that painting.

General Hospital’s Lulu Spencer (Emme Rylan) and Maxie Jones (Kirsten Storms) take Charlotte Cassadine (Scarlett Fernandez) to Kelly’s. Maxie tells Lulu that Peter August (Wes Ramsey) has agreed to move in with her. Maxie and Lulu discuss the high school dance. Maxie says it is wonderful to see Lulu caught up in someone again. Maxie asks Lulu what is next for her and Dustin Phillips (Mark Lawson). Maxie laughs that they are having a normal night.

General Hospital’s Willow Tait (Katelynn MacMullen) arrives and approaches Brad Cooper (Parry Shen). Willow considers Brad a friend and wants to help. Willow tells Brad that Julian Jerome (William DeVry) is worried about him. Willow tells Brad she is there when he needs to talk. Willow is sure Brad and Lucas will work things out. Willow runs into Cassandra on the way out the door. Cassandra looks inside and sees Charlotte.

GH Spoilers: Lucas Jones Gets Needed Advice From His Dad

General Hospital’s Lucas Jones (Ryan Carnes) visits his father Tony Jones (Brad Maule) grave after thinking over his conversation with Brad. Lucas would give anything to talk to him again. Tony asks Lucas what is wrong that he summoned him. Lucas tells Tony about Wiley Cooper-Jones (Theo and Erik Olson). Lucas talks about memories of his childhood. Lucas wants his son to feel safe and loved as he did. Lucas tells Tony about his and Brad’s problems. Lucas says he was desperate enough to let Julian back into his life. Lucas tells Tony how much he wanted to believe in Julian.

Julian never thanked Tony for raising Lucas. Julian wants to carve out space in Lucas’ life. Julian goes to the cemetery to speak to Lucas. Lucas demands to know what he wants.