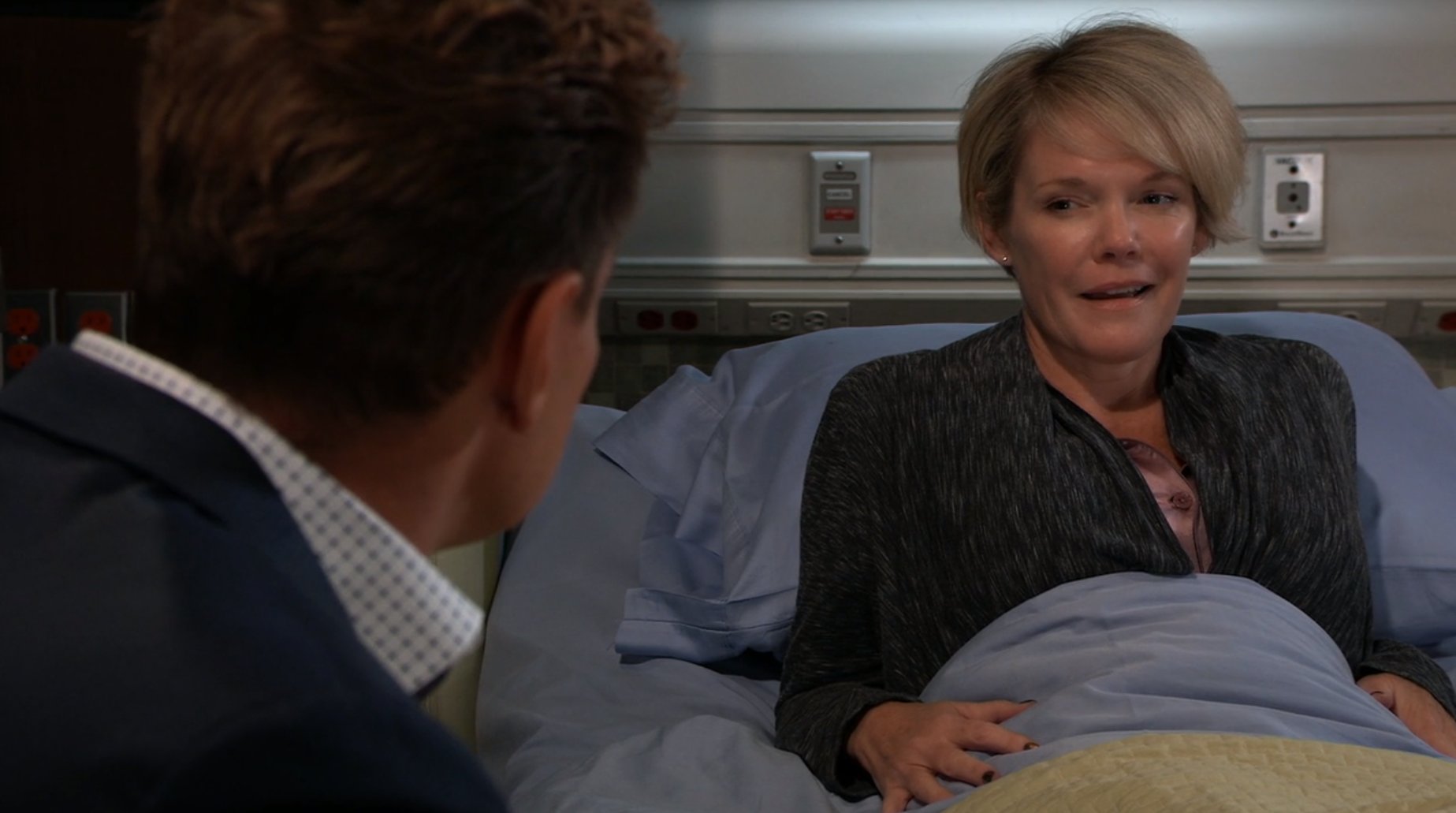 General Hospital (GH) spoilers for Monday, November 11, tease that Hamilton Finn (Michael Easton) will enjoy more Daddy-daughter time with Violet Barnes (Jophielle Love). It’ll warm his heart as he gets to know his little girl. Hayden Barnes (Rebecca Budig) will love watching Finn and Violet grow closer, but things will get complicated later in the week.

In the cemetery, Lucas Jones (Ryan Carnes) will push Julian Jerome (William deVry) to admit the truth. GH spoilers say Julian will confess to blackmailing Brad Cooper (Parry Shen), but he’ll insist he did it to protect Lucas and “Wiley Cooper-Jones” (Erik and Theo Olson). He’ll try to make Lucas see things his way, but that plan won’t pan out.

General Hospital spoilers say Lucas will cut Julian out of his life and stomp off. He’ll refuse to listen to Julian’s protests, so their relationship has been completely shattered for now. Over with Brad, he’ll face pressure from Liesl Obrecht (Kathleen Gati). She’ll ask what Brad’s done to cover his tracks, so she’s not going to be happy about the secret spillage. Brad told Lucas a story that incriminated Liesl, but he fudged the details. He’d better hope he can quiet Liesl’s anger and keep her mouth shut!

GH Spoilers: Jason Morgan Will Meet Up With Jasper Jacks

Next, Jason Morgan (Steve Burton) will meet up with Jasper “Jax” Jacks (Ingo Rademacher) and express concern. He’ll think Carly Corinthos (Laura Wright) and Josslyn Jacks (Eden McCoy) could use some extra support. That’ll be weighing on Jax as he faces off with Nikolas Cassadine (Marcus Coloma). The Cassandra Pierce (Jessica Tuck) chaos and Ava Jerome’s (Maura West) predicament have made this an even bigger mess.

Jax will yell that he didn’t sign up for this and will consider exposing Nikolas to Port Charles. Nik will do his best to talk Jax out of it and convince him that their plan must move forward. Meanwhile, Jason and Jordan Ashford (Briana Nicole Henry) will spar. General Hospital spoilers say Jordan won’t want Jason to fight her orders. She’ll think Jason needs to back off for Sam McCall’s (Kelly Monaco) sake, so he’ll at least try.

At Kelly’s, Charlotte Cassadine’s (Scarlett Fernandez) disappearance will leave Lulu Spencer (Emme Rylan) in panic mode. It won’t be long until word spreads to Valentin Cassadine (James Patrick Stuart), who’ll be clashing with Laura Webber (Genie Francis) over the painting. Nina Reeves (Cynthia Watros) will also get the news of Charlotte’s kidnapping, so everyone’s sure to be frantic.

Valentin will receive a troubling phone call at some point, which could be from Lulu. However, there’s also a chance it’ll be Cassandra. She may have some instructions for Valentin – and some dark promises for if he doesn’t carry them out.

Charlotte will hope Papa’s going to track her down soon, but Cassandra will warn no one’s going to find them. She’ll feel confident in their hiding spot and count on this strategy to pay off. We’ll give you updates as other GH news and rumors emerge. Stay tuned to the ABC soap and don’t forget to check back often for the latest General Hospital spoilers, rumors, updates and news.