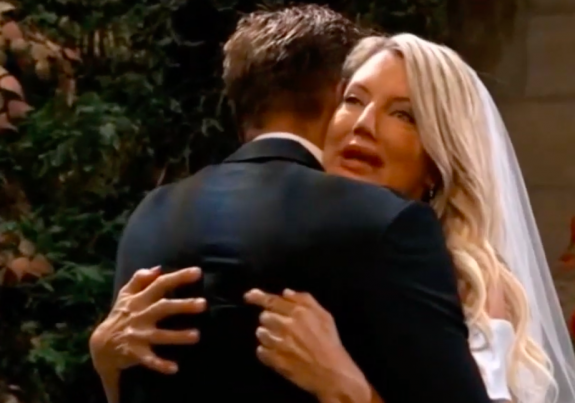 General Hosptial (GH) spoilers tease that Jasper “Jax” Jacks (Ingo Rademacher) has been involved in the codicil hunt since his return to Port Charles but there has been no romance in his life. That should change very soon. Nina Reeves (Cynthia Watros) and Jax obviously have a connection and it shouldn’t be too much longer before things hot and heavy between the two of them.

It was obvious when Jax showed up at the Nurses Ball this past May, that Nina was attracted to him. Of course, she was engaged to Valentin Cassadine (James Patrick Stuart) at the time, and Jax ended up becoming her boss, so no romance has occurred. Jax also seemed to have an agenda about Valentin, so Nina was more suspicious than anything. So Nina planned her wedding and was madly in love with Valentin right up until her wedding day!

But at the wedding, Lulu Spencer (Emme Rylan) revealed that Sasha Gilmore (Sofia Mattsson) wasn’t really Nina’s daughter and an upset Nina left the wedding ceremony and ran straight into Jax. Jax took Nina to his home, and gave her a safe place to sort out her feelings. Nina was very appreciative of Jax’s support especially because it seemed like Valentin had been the person to bring Sasha into Nina’s life.

Most of Port Charles was shocked when Nina seemed to believe Valentin’s lie that he had nothing to do with Sasha. She almost immediately went back to Valentin and the two are still together. But whenever Nina sees Jacks, she gets a look in her eye. Most likely, Nina has only returned to Valentin to take him down for good, because she knows that Sasha couldn’t have pulled off that stunt alone. Her feeling have definitely changed and it seems she may be interested in Jax.

Jax has a couple of reasons to help Nikolas Cassadine (Marcus Coloma) take everything that’s his back away from Valentin. The first, of course, is money. Nicholas has promised that Jax could have the shipping division of Cassadine Industries. The second reason, as Nikolas recently pointed out to Jax, was to get Nina away from Valentin. It seems Jax may be interested in Nina as well? It should interesting when these two finally lay all their cards on the table.

Will Nina and Jax succumb to their passion? Will they be together to watch Valentin lose everything? Some hot scenes are coming up on General Hospital, airing weekdays on ABC, so be sure not to miss an episode. And don’t forget to check back right here for all your General Hospital news, information and spoilers!