The Bold and the Beautiful Spoilers: Monday, November 11 – Hope Fears The Worst When She Can’t Find Thomas – Brooke & Ridge Reach An Impasse 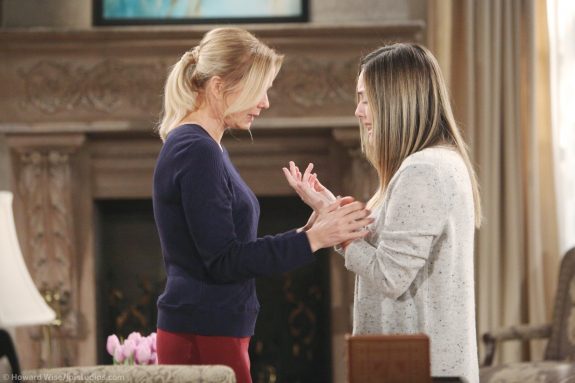 The Bold and the Beautiful spoilers for Monday, November 11, tease that Hope Logan (Annika Noelle) will continue her frantic search for Douglas Forrester (Henry Joseph Samiri) at Forrester Creations. As B&B viewers know, Hope is very concerned about where Thomas Forrester (Matthew Atkinson) might have stashed Douglas – in fact she was so worried about finding him that she did something that could have serious ramifications.

As B&B viewers witnessed, Thomas and Hope were arguing on a catwalk in an industrial area of the Forrester building. Thomas leaned in for a kiss and Hope suddenly shoved him aside and as she ran off, he fell into the vat of steaming liquid below. B&B viewers have been led to believe that the steaming liquid was hydrochloric acid that was being used by Jack Maclaine (Todd McKee) to clean the washing machine elements.

The Bold and the Beautiful Spoilers: Steffy Panics – Thomas Goes Missing After Showdown With Hope

Yet after Thomas fell into the liquid, he was shown floating to the top and clearly not burning as he would be if he had fallen into acid. Could Thomas have fallen into some steaming water or a cleaning solution that went into the vat after the acid was removed? At this point, it’s a mystery as to whether Thomas will survive.

Bold And The Beautiful Spoilers: Hope Logan Continues Her Search For Douglas Forrester

And this comports with the spoilers for next week which indicate that Thomas will be considered missing by Steffy Forrester (Jacqueline MacInnes Wood). At any rate, on Monday’s episode of B&B, it looks like Hope will continue her intense search for Douglas around the Forrester building. It looks like Hope will find Douglas and he’ll be ok, but when she goes to look for Thomas afterwards, she’ll have no luck.

The Bold and the Beautiful spoilers indicate that Hope will fear the worst when she can’t find Thomas. Will she head back to the industrial area where she last fought with Thomas? If so, she might realize that she shoved him awfully close to the vat of liquid, and that might get her worried about Thomas’ well-being. But will she disclose to anyone what actually happened?

Meanwhile, on Monday’s new episode of B&B, Brooke Forrester (Katherine Kelly Lang) and Ridge Forrester (Thorsten Kaye) will find themselves at a stalemate. As B&B viewers know, Ridge and Brooke have been arguing again about Thomas, and they’re both getting pretty tired of going around in circles.

Brooke is adamant that Thomas is unhinged and an unfit parent to Douglas, and she thinks that Hope has got to step in and seek custody of Douglas for the boy’s sake. But Ridge disagrees, and he thinks that Hope has no business trying to adopt Douglas. As far as he’s concerned, Douglas has a family – The Forresters – and they can take care of him.

The Bold and the Beautiful Spoilers: Ridge Finds Out About Thomas and Hope’s Intimate Deal – Father Furious https://t.co/6yGCOsa4cE pic.twitter.com/6hTVK2ORBi

Bold And The Beautiful Spoilers: Bridge Find Themselves At An Impasse

Further, Ridge thinks that Thomas is truly trying to work through his problems and make amends for his past mistakes. He just doesn’t understand Brooke’s unwillingness to forgive Thomas. According to B&B spoilers, Ridge and Brooke will reach an impasse, but where will that leave their marriage? They can’t seem to be in the same room with each other without arguing over the same old issues, so moving forward with their lives together doesn’t seem like an option.