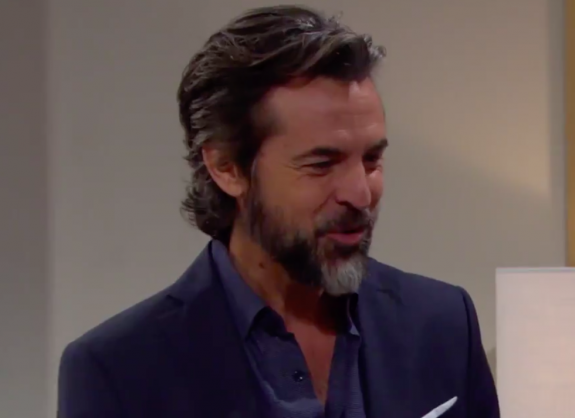 The Young and the Restless spoilers for Monday, November 11, tease that Nick Newman (Joshua Morrow) will arrive at The Grand Phoenix to find Nikki Newman (Melody Thomas Scott), who will note that he hasn’t told Victor Newman (Eric Braeden) that he’s running for office. Nick will say that he doesn’t want to hear that it’s just a waste of time, but he’ll talk to Victor nevertheless.

Meanwhile, Abby Newman (Melissa Ordway) and Chelsea Lawson (Melissa Claire Egan) will chat, but Chelsea will be distracted. Abby will wonder if she’s looking for Simon Black (Jeffrey Vincent Parise), and she’ll note that Chelsea has been acting strange since he arrived at the hotel. Chelsea will notice Nick and make an excuse not to talk with him.

Next on Y&R, upstairs in Amanda Sinclair’s (Mishael Morgan) room, Cane Ashby (Daniel Goddard) will demand to know why Chance Chancellor (Donny Boaz) hit him. Chance will say that Cane screwed Devon Hamilton (Bryton James) out of his money and will say that he’s never met Amanda in his life. Cane and Chance will yell at each other and Cane will fill Chance in on what happened, then he’ll admit that Colin Atkinson (Tristan Rogers) may be involved. Cane will ask where Chance has been this whole time.

At the Newman Ranch, Adam Newman (Mark Grossman) and Connor Newman (Judah Mackey) will stop by to see Victor. Adam will say he needs a favor and wants to take Connor to the farm, which Victor now owns. Victor will be surprised, but he’ll like the idea. Adam will explain to Connor that Chelsea can’t come to the farm with them, but he’ll agree to stop by the hotel and ask her to come.

Meanwhile, at The Grand Phoenix, Abby and Nick will talk about his upcoming debate, and she’ll remark that she’s sure Chelsea will show up for it. Right around this time, Simon will enter the lobby.

Young And The Restless Spoilers: Chance Chancellor Is Back On A Mission

Next on Y&R, back in Amanda’s room, Chance will tell Cane that he’s back to solve a case, and that he won’t apologize until he finds out that Cane’s clean. Chance will then get a text and remark that he’s about to complete his mission. The text will say that the subject is in the hotel.

Chelsea will then call her mother to wire her the $1 million that she gave her previously because she and Connor are in danger.

Down in the lobby, an agent will get a text from Chance saying to keep eyes on the subject and that they’ll nab him when he leaves the building. Also, Phyllis Summers (Michelle Stafford) will chat with Abby and Nick, who will invite her to his debate, but she’ll refuse. Simon will then chat briefly with Nick.

Up in Phyllis’ room, she and Abby will discuss their servers and Phyllis will assure Abby that they’re secure. They’ll look at Phyllis’ computer, which Phyllis will be very protective of. In the course of their conversation, Phyllis will accuse Abby of wanting to keep her from Nick. Abby will warn Phyllis not to cross the line.

Next on Y&R, up in the corridor near Amanda’s room, Phyllis will recognize Chance in Amanda’s room when she opens the door, and Chance will greet Amanda as the person who must be his lawyer. He’ll want them out of the hotel since he’s doing a sting operation. The agent downstairs will then send Chance a photo of Simon.

Back down in the lobby, Chelsea will be horrified to see Adam and Connor arrive, and she’ll want them to leave immediately. Adam will send Connor away and demand to know what’s going on. Simon will then come by wanting to talk to Chelsea, but Adam will tell him that it can wait. Simon will notice the agent at the bar…and his gun.

‘The Young and the Restless’ Spoilers: Kyle Is His Own Worst Enemy – Theo Deserves A Chance https://t.co/ZxtAhqwra5 pic.twitter.com/Tafy2xncEd

Adam will still be trying to get answers from Chelsea when Simon comes up again and pulls Chelsea away, which will prompt Adam to react, which in turn will prompt Simon to show his gum and demand everyone out except Chelsea, Connor, and Abby. Adam will state that he’ll have to shoot him before he leaves without his family.

Next on Y&R. upstairs in Amanda’s room, Chance will tell Amanda to do her due diligence next time, then he’ll get a text and Phyllis will show him the surveillance equipment in her room.

Back downstairs, Abby will shoo the guests out of the lobby, and she’ll stand near the panic button at the bar while Simon blames Chelsea for this unfortunate situation. He’ll say that he’ll have to figure out a way to resolve this.

Finally, on Monday’s new episode of Y&R, Nick will talk with Victor at the ranch about his running for office. Victor will say that he always hoped that Nick would aim higher. Nick will say that he wants Victor to be proud even if he goes out on his own, and he’ll want to know if Victor is ok with being disappointed from time to time. Victor will mention that Chelsea told Adam to take Connor out of town, which will prompt Nick to call Chelsea and leave a voicemail message saying they need to talk.