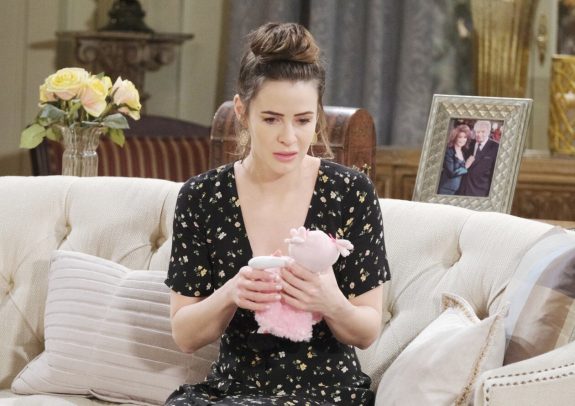 Days of Our Lives spoilers tease that there are five key takeaways from this week’s Days of Our Lives for fans to look for; bear in mind that the time jump has occurred, and Salem and the Salemites have progressed one full year in time. Some spoilers will be after the jump, while others may be flashbacks of what happened during the one year that has passed.

DOOL Spoilers: Jennifer Deveraux Wakes Up And Is Reunited With Her Family, Although There Is Drama!

Days of Our Lives viewers will recall from Friday, November 8’s episode that as Jack Deveraux (Matthew Ashford) turned over the hourglass given him by John Black (Drake Hogestyn) and Marlena Evans (Deidre Hall) while he sat watch at Jennifer’s bedside in Salem University Hospital, once the sands ran through, time had advanced by one year and Jennifer woke up! Jack let her know that she had been in a coma for a year, and soon she is reunited with their children, Abigail DiMera (Kate Mansi) who is back from Paris, and JJ Deveraux (Casey Moss).

However, there will be drama in the family; an unexpected death will be revealed, which may be of a family member or an extended family member; Jack will update Jennifer that the person thought to be responsible for pushing her over the balcony is in prison, and there will be other drama as well. Chad DiMera (Billy Flynn) will make a confession to Abby, and also admit to her that he has been in contact with Stefano DiMera (Joe Mascolo) – or someone pretending to be, perhaps – and Eric Brady (Greg Vaughan) will notice that JJ is high! Brady Black (Eric Martsolf) may confront JJ also, because JJ will blow up at him!

Sarah Horton (Linsey Godfrey) will have had her and Eric’s baby by this time, and her baby drama will take a surprising turn! Nicole Walker (Arianne Zucker) and Sarah will regret a deception they had shared in, and share their guilt over it. Days of Our Lives viewers will recall that before Jack turned over that hourglass and Salem jumped ahead in time by a year, Kristen DiMera (Stacy Haiduk) had spilled the baby beans to Eric and he showed up right after Nicole and Sarah had agreed to keep Eric’s paternity a secret; perhaps they lied about the baby’s paternity and now they regret it. Will the baby be sick and need a blood transfusion or organ transplant and Eric is the only viable donor? Viewers will have to wait and see!

Ben Weston (Robert Scott Wilson) and Ciara Brady (Victoria Konefal) seem to be having some serious relationship problems, as Ciara will go to her grandfather Victor Kiriakis (John Aniston) and tell him she’s given up on Ben! Chances are, he went down for the death of his sister Jordan Ridgeway (Chrishell Hartley) whose body he found in his house in Friday’s episode before the time jump. Ben shares his woes with a surprising confidant, which may be a cellmate or someone who comes to visit him in prison, who will be someone Days of Our Lives viewers may not suspect!

Brady and Kristen will also have encountered some problems, as Brady will recall his struggles from the past year and Kristen will talk about the incident that caused her to leave Salem for a while and then return. It is a possibility that even though Kristen has been very careful during her pregnancy, which was considered high-risk, that she miscarried or the baby was stillborn or died in infancy anyway, and she just needed to get away for a while. Brady of course would have struggled with grief if that turns out to be the case as well, and may even have struggled with his alcoholism over the loss of their child.

It appears that Princess Gina VanAnhalt (Kristian Alfonso) still reigns in Salem, and she has a shocking new companion! Considering Dr. Wilhelm Rolf (William Utay) seems to have gotten a phone call from Stefano DiMera (Joseph Mascolo) before the time jump, what more shocking companion could there be than Stefano!

Whether Days of Our Lives powers-that-be took the risk of angering fans by recasting the Phoenix or whether this may be a doppelganger story, remains to be seen, but since Chad has had contact from him also, there is definitely the possibility of either Stefano or a doppelganger that can even fool Princess Gina! She will also make a move on John, however!