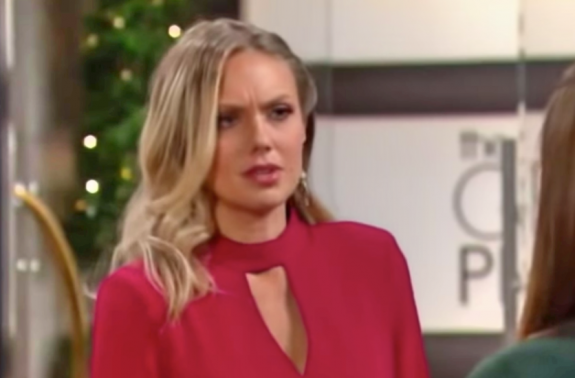 The Young and the Restless promo for the week of November 11th thru 15th indicate that Ashley Abbott (Eileen Davidson) will return to Genoa City, a hostage crisis unfolds at the Grand Phoenix, and the Newman family panics as they receive word of the crisis.

Ashley who has been living in Paris, returns to Genoa City this week. The reason for her visit has to do with meeting her new nephew Theo Vanderway (Tyler Johnson). The two have a lot to talk about as Ashley gives Theo advice on adjusting to his new family. Talk also turns to Theo’s unemployment. Ashley wants to help Theo and offers him a job working for her in Paris. This is a huge opportunity for Theo, but is he willing to leave Genoa City for this new job.

The Young and the Restless Spoilers: Nick Issues A Threat – Tries To Protect Chelsea From Calvin’s Enemies!

Simon Black (Jeffrey Vincent Parise) makes good on his threats towards Chelsea Lawson (Melissa Claire Egan). He confronts her at the Grand Phoenix about the money he’s owed. However, things take a dangerous turn when he pulls out a gun and takes her Abby Newman (Melissa Ordway), Connor Newman (Judah Mackey), and Adam Newman (Mark Grossman) hostage. Abby begs Simon to let them go, while Adam steps up. He warns Simon that he’ll have to shoot him before he takes his family. The two men are seen wrestling with a gun as Chelsea looks on and Abby screams.

Young And The Restless Spoilers: Paul Williams And Rey Rosales Try To Form A Plan

Nick tells Paul to do something because Abby and Chelsea are in there. Yet, what he doesn’t realize is that Connor and Adam are also in the hotel. Once word gets around Victor Newman (Eric Braeden) and Nikki Newman (Melody Thomas Scott) are going to rally the family as they await word on the crisis.

While Paul and Rey are on the outside trying to form a plan, help is on the way inside the hotel. Chance Chancellor (Donny Boaz) who recently returned to town is working with federal agents on the case to nab Simon. With the situation turning dangerous, Chance has to step in. In the promo, he’s seen crawling through ventilation ducts.Will Chance arrive in time to save everyone? Or will someone else come to the rescue?

Young And The Restless Spoilers: Fallout From The Hostage Crisis

As everyone awaits to see if the hostages are rescued, there’s going to be fallout from the events. Chelsea will have a lot of explaining to do. Her lies is going to cause a lot of issues and may cost her everything.