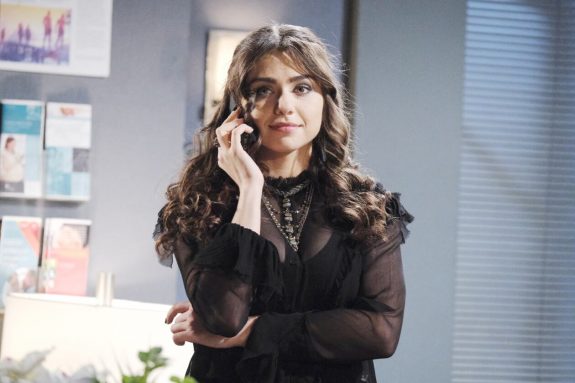 Days of Our Lives (DOOL) spoilers for Tuesday, November 12, tease that Princess Gina (Kristian Alfonso) will remain a free woman. DOOL fans know she’s to blame for Jennifer Horton’s (Melissa Reeves) fall from the bistro balcony, but she didn’t go down for the crime. Since a recent promo revealed Eve Donovan (Kassie DePaiva) is behind bars, it seems she was wrongfully imprisoned instead.

Eve has some fun scenes coming up with Hattie Adams (Deidre Hall), but let’s focus on Princess Gina for now. She’ll use her freedom to her advantage as she tries to grow closer to John Black (Deidre Hall), who’ll be missing Marlena Evans (Deidre Hall). Marlena will be off on an extended trip, which should give Princess Gina a chance to bond with John – as “Hope Brady” of course!

Days of Our Lives Spoilers: Nothing But Love And Loss In Store For These Salemites

Days of Our Lives spoilers say Princess Gina’s startling companion will be revealed. Based on DOOL’s winter preview video, it appears that’ll be Stefano DiMera – but there could be some trickery going on. We’ll probably only see Stefano’s hand for now, but what about later?

Joseph Mascolo passed away a few years back, so he obviously can’t reprise the role. There’s no word yet on a possible Stefano recast, so things may not be quite as they seem. In the meantime, Sonny Kiriakis (Freddie Smith) will get to know a face that’s new to Days fans. Since Will Horton (Chandler Massey) is in prison, Sonny could certainly use someone to confide in.

Days Of Our Lives Spoilers: Sonny Kiriakis Will Get To Know A Face That’s New To Days Fans

Sonny will have a nice chat with Evan (Brock Kelly), who’s serving as a new nanny to David Ridgeway. Days of Our Lives spoilers say they’ll hit things off as friends, but could they become more at some point? That’s certainly an option depending on how this whole Will situation plays out.

Ciara will admit she’s given up on Ben, but perhaps she hasn’t really. Days of Our Lives spoilers point to some secret investigating soon, so Ciara may be playing Victor. After all, Vic would have a strong motive to frame Ben for his own hit on Jordan! He’s been clear about wanting to protect Ciara from the reformed serial killer.

Some hot drama’s ahead in Salem, so stay tuned. We’ll give you updates as other Days news and rumors emerge. Stick with DOOL and don’t forget to check back often for the latest Days of Our Lives spoilers, rumors, updates and news.