General Hospital Spoilers: Alexis Gets Worst, TJ May Have A Diagnosis – Can He Save Her? 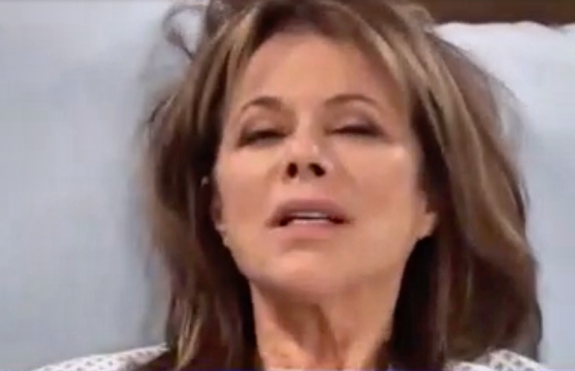 General Hospital spoilers tease that TJ Ashford (Tajh Bellow) will have a diagnosis for a sick someone in an upcoming episode of GH!

GH Spoilers: Doctors At General Hospital Are Trying To Find Out What’s Wrong With Alexis Davis

As General Hospital viewers know, Alexis Davis (Nancy Lee Grahn) has been suffering from an illness that even Dr. Hamilton Finn (Michael Easton) is having a hard time diagnosing. Of course, GH viewers know that Alexis has been poisoned by her personal trainer, Kendra Lennon (Michelle Argyris) by her mixing a so far unknown noxious substance into her nutritional drink which is part of her exercise protocol.

So far she has developed painful rashes on her hands and feet and is losing her hair as well. Doctors at GH are tearing theirs out trying to find out what is wrong so they can successfully treat her, and apparently young med student TJ has jumped in to help as well!

General Hospital Spoilers: Julian And Laura Might Have Made A Mistake With Ava – She’s Not Crazy!

Viewers will recall from recent General Hospital episodes that Julian Jerome (William DeVry) found a dead rat that fell off the dumpster in the back of Charlie’s Pub where unknown to Julian, Kendra had disposed of an open container of the nutritional drink. The rat obviously got into it and ate some of it if not all and died from it. Several types of poison including rat poison could cause Alexis’ symptoms, including mercury, arsenic, and thallium, but if Julian was able to find that open canister in his dumpster it would be the smoking gun that would solve the case and tie Kendra, who is really Kiefer Bauer’s (Christian Alexander) older sister, to the intentional poisoning of Alexis. Julian needed to smell a rat rather than find one!

GH Spoilers: Alexis Davis Has Been Asked About Foods She Ate

Alexis has been asked about foods she ate and drinks she drank the day she first became ill, but she has continually neglected to mention the nutritional drink! She is in constant danger with Kendra coming to her hospital room at General Hospital and possibly putting more poison in her hospital food or even her IV; but so far, no one has put two and two together and come up with four! Finn suspects something other than an infectious disease is causing her symptoms, but Kendra may be using a poison that goes through the body quickly doing deadly damage while being undetectable in blood tests or tests of bodily wastes.

General Hospital Spoilers: TJ Ashford Will Think Outside The Box

TJ will likely think outside the box and suspect poison, but unlike Finn and the other doctors at GH who have heavy caseloads and situations in their personal lives that may be distractions, TJ may have the time to actually do the research to find out what types of substances or illnesses could cause Alexis’ symptoms and therefore be able to order tests that will detect the poison or poisons in her system. He would then give his ideas of a diagnosis to Finn, who is the primary physician on Alexis’ case and then an antidote will need to be found once they find out what she has been poisoned with.