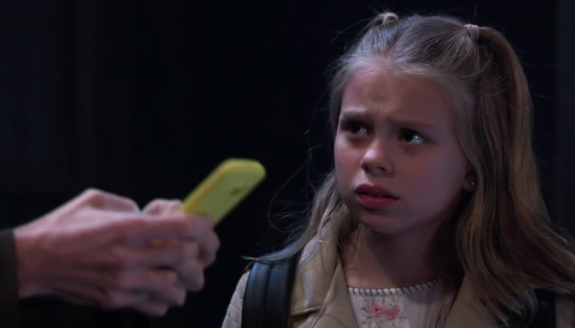 Jordan believes Jason but thinks he should realize others might not. Jason arrives to speak to Jasper Jacks (Ingo Rademacher). Jason tells Jax that the fan was rented by Jax’s company that Cassandra escaped in, Nikolas Cassadine (Marcus Coloma) listens from the terrace.

Jax pretends to have no idea who has his card information but it’s not Jerry. Jax refuses to give up Nik and tries to get rid of Jason. Jason sees Nik’s footprints and asks about them. Jason tells Jax he is withholding information. Jason tells Jax he will help if he is in trouble and needs it. Jax says he would never put Jocelyn Jacks (Eden McCoy) or Carly Corinthos (Laura Wright) in danger. Jason wants to hear from Jax if he gets a lead on Cassandra. Jax is furious with Nik and threatens to turn him over to Jason.

General Hospital’s Valentin Cassadine (James Patrick Stuart) and Nina Reeves (Cynthia Watros) arrive at the PCPD for questioning. Laura says Cassandra calls Valentin when she first got out. Nina is upset that Valentin is a suspect. Valentin tells Jordan that Cassandra wanted his help. Valentin says Cassandra didn’t have anything to use against him and that was their last contact. Lulu calls the police about Charlotte Cassadine’s (Scarlett Fernandez) disappearance. Nina backs up Valentin’s story and wants Cassandra punished for what she did to Sasha Gilmore (Sofia Mattsson).

Valentin figures out that Cassandra has Charlotte and tells Nina. Lulu Spencer (Emme Rylan) and Maxie Jones (Kirsten Storms) get to the police station. Maxie thinks Charlotte is hiding out somewhere. Valentin will deal with Cassandra himself and needs Nina’s help. Nina starts a fight with Lulu while Valentin waits for Cassandra to call. Cassandra calls and Valentin demands to know where his daughter is. Cassandra gives her demands and Valentin promises to take care of it. Laura suggests Valentin and Nina go home. Valentin tells Nina she may have saved Charlotte’s life.

General Hospital’s Nikolas Cassadine (Marcus Coloma) arrives at Jax’s house. Jax demands answers from Nikolas about Cassandra. Jax is upset that Nik didn’t involve tell him about Cassandra. Nik wanted to use Cassandra to get to Valentin but it didn’t work. Jax wants no part of anyone dealing drugs. Jax threatens to hand Nik over to Jason.

General Hospital’s Hamilton Finn (Michael Easton) sits down for a sandwich when Hayden Barnes (Rebecca Budig) arrives with Violet Barnes (Jophielle Love) in tow. Finn and Hayden talk to Violet about his living arrangements. Violet wants to have a tea party. Violet and Hayden tell Finn about her tea parties at home. Finn wants to meet Violet’s friends. Finn wants to put Violet in the guest room so he can talk to Hayden. Finn offers to carry her there.

General Hospital’s Lucas Jones (Ryan Carnes) tells Julian Jerome (William DeVry) he wants nothing more to do with him. Lucas tells Julian that he knows he tried to break up his marriage. Julian denies everything at first but admits the truth. Julian tries to convince Lucas that Brad Cooper (Parry Shen) is in something shady. Lucas asks how he thought he could use his family. Lucas tells Julian he is done, no more lies or betrayals. Brad tells Lucas about Charlotte’s disappearance. Brad tells Lucas he thinks he saw Cassandra. Brad has no intention of leaving Lucas or their son.

General Hospital’s Liesl Obrecht (Kathleen Gati) tells Brad they have pressing matters to take care of now. Liesl and Brad talk to the cops as well. The cop asks if they saw Cassandra today. Brad thinks he saw Cassandra earlier. Liesl prays no harm comes to Charlotte. Brad says Charlotte is a brat and probably walked off somewhere. Brad tells Liesl that Lucas cannot see them together. Liesl goes out the back way to avoid Lucas.