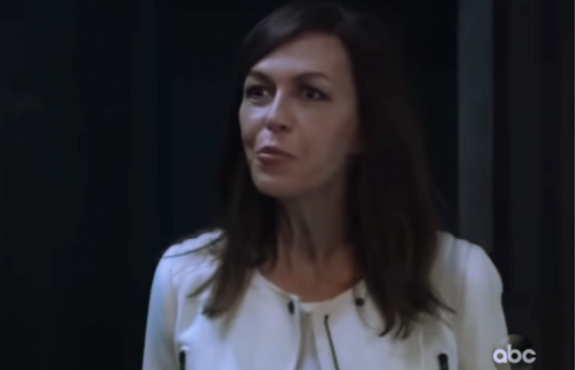 Anna found Cassandra making threats against Charlotte, so she ordered her to unhand the child. On Tuesday, Anna will have an enticing offer for Cassandra. She’ll insist that if Cassandra lets Charlotte go, then Cassandra can walk free. Of course, it’ll be tough for Cassandra to take Anna’s word for it! She may wonder how she can be sure Anna will keep her end of the bargain.

Over with Jordan Ashford (Briana Nicole Henry) and Laura Webber (Genie Francis), they’ll discuss a deal and wonder if someone else took it. They may be trying to nail down who helped Cassandra escape, but they certainly won’t suspect the presumed dead Nikolas Cassadine (Marcus Coloma). However, it’s easy to see that Nikolas has made major mistakes. He could be facing exposure if he can’t be more careful.

General Hospital Spoilers: Alexis Gets Worst, TJ May Have A Diagnosis – Can He Save Her?

As for Jason Morgan (Steve Burton), he’ll show up to see Valentin Cassadine (James Patrick Stuart) on Tuesday. GH spoilers say Jason will have questions about Cassandra, so Valentin may dodge them artfully. Trust isn’t something Valentin tends to give out very often, especially when he’s being interrogated.

Meanwhile, Peter August (Wes Ramsey) will listen in on Lulu Spencer’s (Emme Rylan) conversation with Maxie Jones (Kirsten Storms). He’ll declare that he’s sorry, but he doesn’t believe what they’re saying for one second. It’s possible Maxie and Lulu will battle guilt for taking their eyes off Charlotte for too long. Peter may be shutting down their attempts to blame themselves for this.

Then again, this could involve Valentin or even some kind of accusation that could trace back to Peter’s own secrets. Whatever the case, Peter will do his best to steer their chat in another direction. Speaking of chats, Jasper “Jax” Jacks (Ingo Rademacher) will have one with Carly Corinthos (Laura Wright) on Tuesday. He’ll suggest he’s got so much to tell Carly – and he indeed does have a huge secret to spill.

There’s no word on when Jax will blab, but Carly will definitely learn a bombshell soon. It’s reasonable to assume that’ll involve Nikolas’ survival. Carly will reach an agreement with Jax this week, so that may involve keeping Sonny Corinthos (Maurice Benard) and everyone else in the dark.

Finally, General Hospital spoilers say Hamilton Finn (Michael Easton) will divulge something sweet. He’ll confide in Hayden Barnes (Rebecca Budig) about their daughter, so expect some warm moments. Hayden will suggest she’s dreamed of hearing Finn make this declaration, which may involve how they feel like a family. Now that Finn knows Violet Barnes (Jophielle Love) exists, they’re all bound together.