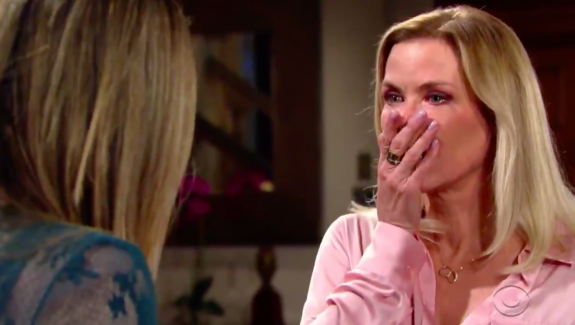 The Bold and the Beautiful spoilers for Tuesday, November 12, tease that Brooke Forrester (Katherine Kelly Lang) will hear quite a story from her daughter Hope Logan (Annika Noelle). Hope will come home from Forrester Creations with Douglas Forrester (Henry Joseph Samiri) and signed adoption papers in hand. Brooke will probably be thrilled, but there will be more to Hope’s story than meets the eye.

As B&B viewers know, Hope is under the belief that Thomas Forrester (Matthew Atkinson) fell over the catwalk in the industrial area of the Forrester building and into a vat of hydrofluoric acid, which can completely disintegrate a human body. Of course, Thomas didn’t just fall – he was shoved aside by Hope before he fell, so Hope will be feeling very guilty about the whole thing.

Of course, Hope won’t know for sure whether Thomas is dead, since there would be no body left if he fell into the hydrofluoric acid. But it looks like she’ll fear the worst, and she’ll end up telling Brooke that she things that she killed Thomas. So, now she’ll be in the position of having gotten what she wanted – custody of Douglas – but she’ll fear that she committed a horrible crime by pushing Thomas into the acid.

The Bold and the Beautiful Spoilers: Liam Doubts Steffy – Believes Thomas Is Still A Serious Threat

According to B&B spoilers, Hope will tell Brooke the whole story about what happened with Thomas signing the papers, then about the frantic search for Douglas, and finally about pushing Thomas aside and the splash she heard from the supposed acid. The Bold and the Beautiful spoilers indicate that Hope will get increasingly upset as she tells Brooke the whole story and she’ll state tearfully that she thinks that she killed Thomas.

B&B spoilers also say that Brooke will urge her daughter to keep what happened to herself. After all, if Hope decides to come forward, then she could be charged with attempted murder. So, Brooke will think that she should keep quiet about what she thinks might have happened to Thomas, and just focus on being a mother to Douglas.

Meanwhile, on Tuesday’s new episode of B&B, Ridge Forrester (Thorsten Kaye) will visit with his daughter Steffy Forrester (Jacqueline MacInnes Wood). It looks like he’ll end up at Steffy’s house, and while he’s there, Steffy will share her opinions about his current situation with Brooke. Ridge will probably need someone to lean on, given that his marriage is crumbling because of his disagreement with Brooke over Thomas.

It looks like Ridge will open up about his problems with Brooke to Steffy, and that will necessarily mean filling Steffy in about Brooke’s feelings about Thomas. As B&B viewers know, Brooke feels that Thomas is sick and irredeemable, and that will probably disgust Steffy. Of course, Steffy knows all about Brooke’s past and knows that she’s made her share of terrible mistakes, too.

According to B&B spoilers, Steffy will give Ridge a piece of her mind about Brooke and what she’s capable of. Don’t expect Steffy to hold back – it looks like Ridge will get an earful from his daughter, as Steffy lays out exactly what she things of her stepmother.