The Young and the Restless Spoilers: Simon Threatens Chelsea And Her Family- How Far Will Adam Go To Stop Him? 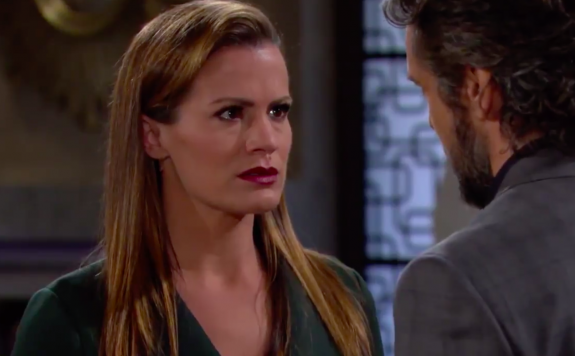 The Young and the Restless spoilers tease that Simon Black (Jeffrey Vincent Parise) means business and that he will take any means necessary to make sure that he gets what he wants. And what he wants, of course, is the money that Chelsea Newman’s (Melissa Claire Egan) now deceased husband left for her. Here’s what you need to know.

The Young and the Restless Spoilers: Chelsea Is On Pins And Needles

Chelsea has been on pins and needled because Simon Black has been on her heels. And now it looks like he’s no longer playing this cat and mouse chase with the wealthy widow. He has gone as far as to threated Chelsea and her son Connor in order to settle their debt. Chelsea knows that she is going to have to come up with something and fast, too.

The Young and the Restless head-writer Josh Griffith puts it this way to Soaps in Depth, Since Chelsea put the majority of the money she received from Calvin to the Grand Phoenix, she’s strapped for cash. While it’s safe to guess that Chelsea may have some money stashed away for a rainy day, it is not enough to settle her debt with Simon and make this problem go away.”

In addition, it appears as though Adam Newman (Mark Grossman) will be getting involved in this mess, too. He already knows that something is up, but is having a hard time in getting Chelsea to tell him the truth. Sooner or later though, the cat will come out of the bag.

Griffith adds, “Simon’s threats to Chelsea escalate, leading to a dangerous turn of events when Adam gets involved. Simon is done playing games with Chelsea and will send a very clear and public message that he means business.”

The Young and the Restless Spoilers: Simon Threatens Chelsea And Her Family

Of course, knowing that Adam is involved now means that things won’t end very well for Simon, or even for Chelsea for that matter. But with that said, Simon will most definitely apply pressure on Chelsea, which will make the situation even more stressful for her. Fans will have to tune in to The Young and the Restless on the CBS network to find out what will happen next!

The Young And The Restless (Y&R) Spoilers: Amanda Knows Naya Is Not Telling The…

The Young And The Restless (Y&R) Spoilers: Amanda Learns Naya Lied About…