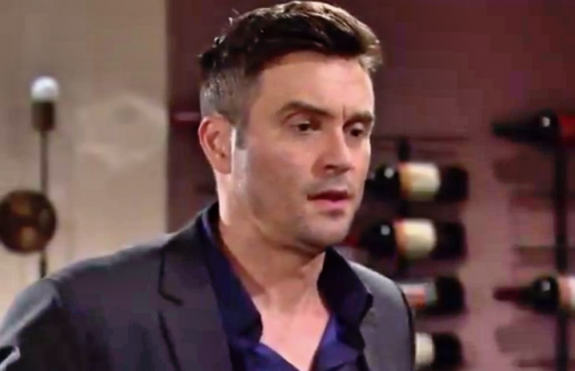 The Young and the Restless spoilers for Tuesday, November 12, tease that Simon Black (Jeffrey Vincent Parise) will take out his gun. Abby Newman (Melissa Ordway) will offer him what’s in the hotel safe, but he’ll say it’s not enough. While all this is going on, Chelsea Lawson (Melissa Claire Egan) will do her best to calm Connor Newman (Judah Mackey).

Next on Y&R, Chance Chancellor (Donny Boaz) and Phyllis Summers (Michelle Stafford) will be in her hotel room. She’ll try to grill him for information about Katherine Chancellor’s (Jeanne Cooper) will, but he’ll be preoccupied and will want to get eyes on what’s going on in the lobby. They’ll watch the standoff unfolding in the lobby from Phyllis’ laptop.

In Amanda Sinclair’s (Mishael Morgan) room, Cane Ashby (Daniel Goddard) will announce that the elevators aren’t working, and they’re trapped on the floor. Amanda will be seriously agitated to know that they’re trapped and can’t escape.

Back in the lobby, Chelsea will offer to wire Simon $1 million from her mother, but he won’t trust her, and he’ll take away their phones. Abby will manage to push the panic button at the bar while Simon is occupied – which Phyllis will be able to detect from her vantage point while Chance studies the hotel schematics.

Young And The Restless Spoilers: Nick Newman Learns About The Hostage Situation

Next on Y&R, at Crimson Lights, Nick Newman (Joshua Morrow) and Jack Abbott (Peter Bergman) will talk about Nick’s campaign, and Nick will wonder why Chelsea isn’t there yet. Rey Rosales (Jordi Vilasuso) and Paul Williams (Doug Davidson) will then arrive and announce that Nick’s debate has been canceled because of a hostage situation at The Grand Phoenix. Nick will be instantly worried.

Next on Y&R, Simon will talk with Paul by phone, while Chance tells Phyllis to text Abby, who’s got a hidden cell phone, and tell her that they can see her and that they need her help. Abby will nod discreetly. Paul will suggest that Simon surrender, but Simon won’t agree to that, and he’ll end up pulling Connor away from Adam and Chelsea. Simon will tell Paul that he has 30 minutes to get him a jet before people start dying, starting with Connor.

Up in Phyllis’ room, Chance will get the elevator override key from Phyllis – Phyllis will have to be his eyes. And in Amanda’s room, she’ll tell Cane that there are police outside and that the press is probably going to be all over this. Cane will deduce that Amanda doesn’t want anyone to know that she’s there.

Meanwhile, at Crimson Lights, Nick will be getting agitated, and Paul will assure him that they have a plan and just need to do their jobs. Soon, Rey and Paul will announce that they’re going to move in on the hotel.

Young And The Restless Spoilers: Adam Newman Offers Himself As A Hostage

Next on Y&R, Chance will then enter the air duct system via the elevator, while Phyllis tells him everyone’s position in the lobby. While this is going on, Adam will ask Simon to take him instead of Connor, since he’s higher-profile and knows how to get away with a crime. Adam will offer to give Simon a whole new life if he walks out of there with him.

Chance will then text Abby to get ready. Abby will tell Simon that Adam is capable of pulling off everything he’s promising, but Simon will grab Connor and will announce that he’s done talking. Simon will aim his gun at Adam, Abby will yell, “Stop!” and Phyllis will tell Chance, “Now!” Chance will then drop from the ceiling and punch Simon, and the police will enter.

Nick will run to Chelsea while Adam holds Connor and Paul regroups with Chance. Jack will check on Abby, and Chance will announce that Abby was pivotal in the operation. Phyllis will appear and gloat about her work behind the scenes. Finally, Chelsea will promise to answer Nick’s questions later before going to Connor and Adam and embracing them.