Days of Our Lives Spoilers: Salem Flashes To The Future! – Chabby Is Back, JJ Is Off The Rails 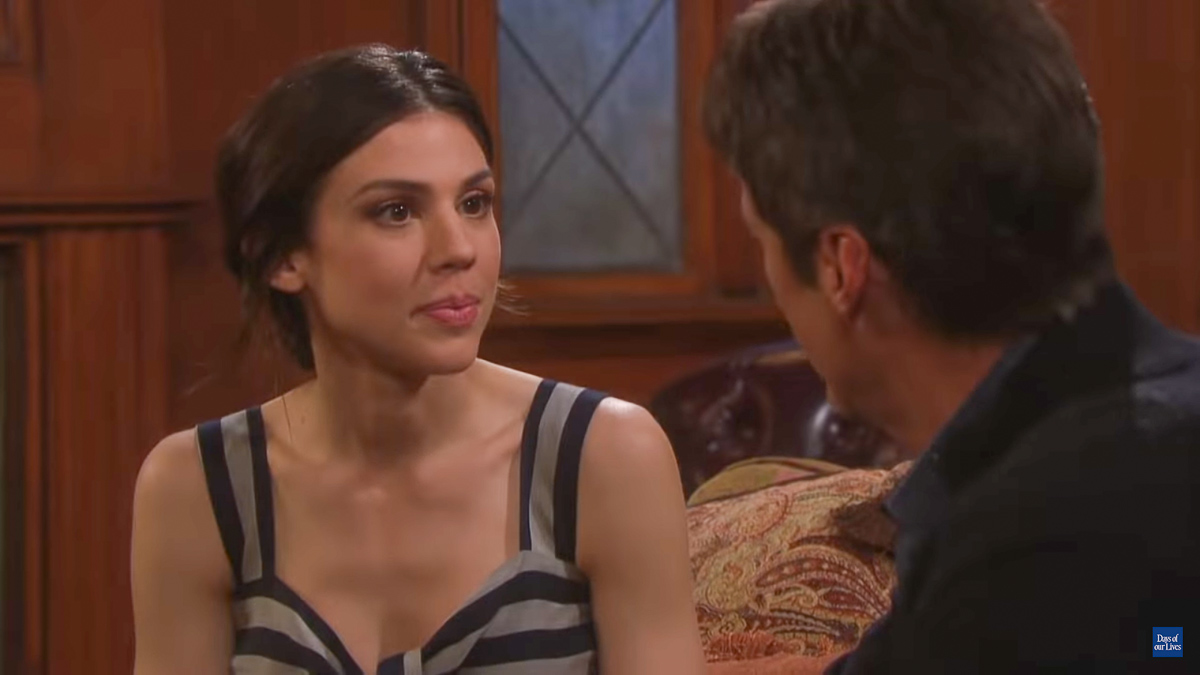 Days of Our Lives spoilers tease that every one’s lives have been changed forever when the hourglass went forward a year! Unbelievable changes have occurred in the Salemites’ lives, and the biggest shock of all – STEFANO DIMERA (or his doppelganger) RETURNS! However, in the preview only his hand is shown and it looks like Dr. Wilhelm Rolf (William Utay) invented a youth serum! Perhaps as Salem went forward in time, the Phoenix went backward in time?

In Jennifer Deveraux’s (Melissa Reeves) hospital room, Jack Deveraux (Matthew Ashford) continues to explain that she was in a coma for a whole year, as Doug and Julie Williams (Bill and Susan Seaforth Hayes) appear to be outside her room in a hallway, and Julie notes in amazement how much has changed in a year!

Days of Our Lives Spoilers – Xander Kiriakis And Nicole Walker Work Together, Ciara Brady Is In The Executive Program At Titan And More Changes Still In Salemites’ Jobs

Xander Kiriakis (Paul Telfer) and Nicole Walker (Arianne Zucker) are now working together and shown in a boardroom both dressed for success, while Victor Kiriakis (John Aniston) welcomes his granddaughter Ciara Brady (Victoria Konefal) to Titan Industries! She is also dressed for success in a white pinstripe suit with a black blouse – a totally different Ciara! Jack talks to Abby, who he calls his number one reporter, while Kayla is amused to find Kate Roberts DiMera (Lauren Koslow) waiting tables at Brady’s Pub!

Lani Price (Sal Stowers) is shown in black and white film, looking sad. Eli Grant (Lamon Archey) asks Abe Carver (James Reynolds) how Lani is – Abe says in a grave tone of voice, “Lani’s GONE!” Could he mean “gone” as in – DEAD? Also filmed in black and white, Ciara is on alert looking out of an office door while a disheveled JJ Deveraux (Casey Moss) points a gun at someone; has he gone off the rails? Sonny sadly talks to Rafe about how much he misses Will Horton (Chandler Massey).

Ben Weston (Robert Scott Wilson)is in prison, and his cellmate is – Clyde Weston (James Read) who tells him he decided to come and keep him company, and that he misses him! Hattie Adams (Deidre Hall) tells Eve Donovan (Kassie DePaiva) that she’s the best friend she’s got! Gabi DiMera (Camila Banus) and Eli are back together, apparently drawn together in their grief.

Princess Gina VanAnhalt (Kristian Alfonso) is with John Black (Drake Hogestyn) while Marlena Evans (Deidre Hall) is gone! Princess Gina and John are shown having dinner and she asks him if he still misses Marlena! Meanwhile, Jennifer, still in her hospital bed, remembers someone pushed her, and Abigail goes with her to the balcony of The Bistro where it happened to try to clear Jennifer’s memories up some more of who might have pushed her! Princess Gina comes to Jennifer’s hospital room one more time to try and finish the job but will not succeed!

Days of Our Lives Spoilers: Chad Determined To Fix Broken Past – Leaves Troubles Behind In Paris https://t.co/lqsJeYP2MU pic.twitter.com/WU2YO6yyLL

Days of Our Lives Spoilers – Kayla Brady Spots Steve Johnson Dressed As Santa While Frustrations Come To The Surface For Others, And Love Blooms In Unexpected Places

Kayla spots Steve Johnson (Stephen Nichols) dressed as Santa and asks him, “Steve, is that you?” while he turns around, glances, and ignores her and frustrations come to the surface for others as Ben slams down the pay phone in the prison and Xander kicks his office chair over! Love blooms in unexpected places as Xander kisses Sarah.

Several Salemites suffer loss; Maggie Kiriakis (Suzanne Rogers) holds a sobbing Sarah while Justin Kiriakis (Wally Kurth) reels with grief; Brady embraces a weeping Nicole, but others experience revival – or should that be resurrection? Princess Gina talks to a man with a cigar, and while we can only see his hand either holding his cigar or playing chess, she asks him, “WHAT DO YOU THINK, STEFFY?”! Chad tells Abby that he is absolutely sure that this is his father! Xander says all hell’s going to break loose while Gina paints!