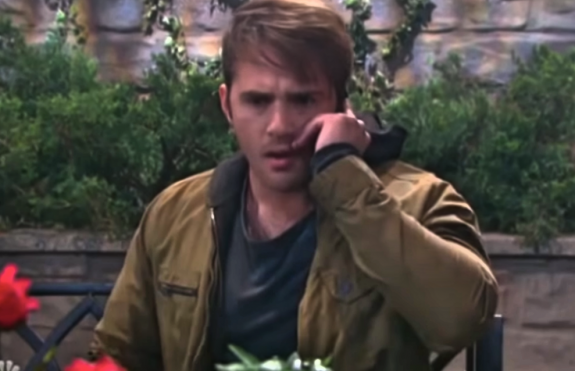 Days of Our Lives (DOOL) spoilers for Wednesday, November 13, tease that the drama’s about to rev up. We should point out that all four soaps will be preempted for coverage of the impeachment hearings, so Wednesday’s show could be aired on Thursday, November 14. Now we can focus on all the action set to happen in Salem!

For starters, JJ Deveraux (Casey Moss) will continue to struggle without Haley Chen (Thia Megia). DOOL recently revealed that Haley died during the year fans missed, so that was certainly a shocking blow for JJ. When you throw in his Jennifer Horton’s (Melissa Reeves) nightmare, it’s easy to see why JJ tried to numb his pain with drugs.

That’s obviously not a healthy coping strategy and Eric Brady (Greg Vaughan) may soon point that out. When Eric runs into JJ and tries to chat with him, he’ll quickly sense that JJ’s high. There’s a good chance JJ will deny it or at least brush it off as nothing. He won’t want Eric or anyone else making a fuss over him. It seems JJ would much rather keep to himself and keep mourning his loss.

Days Of Our Lives SpoilerS: Eric Brady Discovery A Step In The Right Direction

JJ could really use some help, so let’s hope Eric’s discovery will be a step in the right direction. As more people notice JJ’s issues, maybe he can get the professional assistance he needs. Until then, Days viewers will see Sarah Horton (Linsey Godfrey) and Nicole Walker (Arianne Zucker) battle plenty of guilt. Sarah and Nicole are letting Xander Cook (Paul Telfer) claim Eric’s baby as his own, so they’ll continue to wrestle with that secret and worry about the truth coming out.

You can bet the truth will indeed come out down the road, but there could be a few more layers to it. Did a baby swap go down that fans aren’t privy to yet? Time will tell, but let’s concentate on Brady Black’s (Eric Martsolf) side of the story for now. Days of Our Lives spoilers say Brady will recall some terrible moments from past last year. It seems likely Kristen DiMera (Stacy Haiduk) and her baby will fit into those terrible moments, so don’t miss what Brady reveals.

Other Days of Our Lives spoilers say Chad DiMera (Billy Flynn) will shock Abigail DiMera (Kate Mansi). He’ll eventually onfess that he’s been in touch with Stefano DiMera (last played by the late Joseph Mascolo), so Abigail will want the full scoop! We’ll give you updates as other Days news and rumors emerge. Stick with DOOL and don’t forget to check back often for the latest Days of Our Lives spoilers, rumors, updates and news.