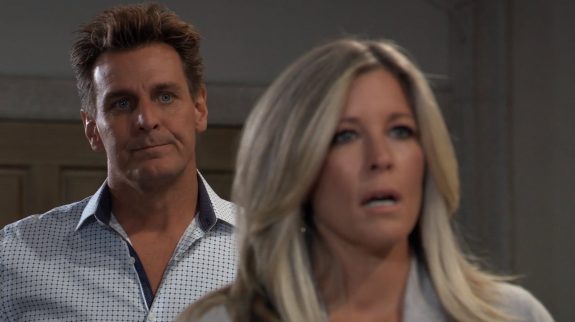 Nik tells Jax he won’t call. Carly Corinthos (Laura Wright) arrives and tells Jax she doesn’t believe his story. Jax tells Carly he is involved in something and can’t have Jocelyn Jacks (Eden McCoy) anywhere near it. Carly asks if Jax is in trouble, he says no. Carly pushes for answers. Nik reveals himself and tells Carly that Jax is helping him. Carly is stunned to see Nik is alive. Carly tells Nik he needs to tell his mother he is alive. Nik talks about the codicil. Carly threatens to tell Laura herself.

Jax wants Carly to hear Nik out. Nik says Valentin cannot know he is alive. Nik tells Carly that Valentin will go after Laura and his son. Nik’s family will be in danger if they find out the truth. Carly demands to know how Jax got involved with Nik. Jax thought Carly would be more understanding. Jax says this is no different than keeping Dev’s secret. Jax hasn’t forgotten trying to keep Nik’s son. Jax tells Carly that Nik used his credit card to help Cassandra escape. Jax says he should come clean but Carly disagrees. Carly agrees to keep quiet.

Peter questions if Valentin knows about Cassandra. Lulu thinks Nina is right about her problems with Charlotte Cassadine (Scarlett Fernandez). Peter is sure that is not the case. Peter tells Lulu she is a great parent. Robert wants to know how Cassandra got on work detail in the first place. Robert also wonders why Peter visited Shiloh Archer (Coby Ryan McLaughlin) in Pentonville. Max comes to Peter’s defense. Maxie says it’s his vendetta against Peter.

General Hospital’s Anna confronts Cassandra on the pier and tries to get her to free Charlotte. Cassandra wants immunity, Anna can’t give her that. Cassandra refuses and calls in reinforcements to watch Anna as she calls Valentin. Valentin needs to stop ignoring her or Charlotte will pay. Cassandra plans to make Charlotte watch her be killed. Charlotte escapes, one of the goons follow. Cassandra orders Anna killed. Valentin has done everything Cassandra asked. Jason takes out Cassandra’s goon and saves Charlotte. Jason and Anna take out the other goon but Cassandra gets away. Jason wants to know why Charlotte came back to the pier. Charlotte wanted to see what was going on.