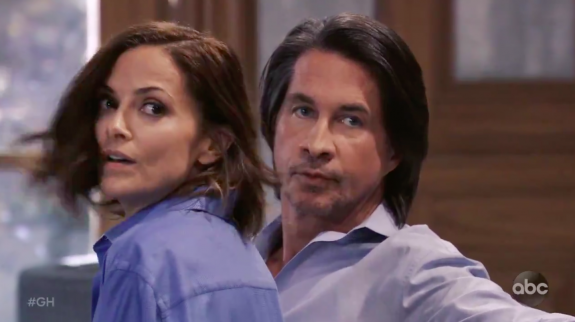 General Hospital (GH) spoilers for Wednesday, November 13, tease that some Port Charles bombshells are in store. Before we get to those, we have a programming note to pass along. All four soaps will be preempted for coverage of the impeachment hearings, so Wednesday’s GH episode will likely be pushed to Thursday, November 14. Now that we’ve got that out of the way, let’s concentrate on what’s next in PC!

First, Ava Jerome (Maura West) will continue to struggle at Shadybrook. When she hears a knock on her door, Ava will make it clear that she doesn’t want visitors. As Sonny Corinthos (Maurice Benard) opens it and leads Avery Corinthos (Ava and Grace Scarola) in by the hand, he’ll suggest Ava will make an exception for this one.

Ava will indeed enjoy spending time with her daughter, but she’ll hate her current circumstances. On the bright side, Sonny’s visit will give these co-parents a chance to hash things out. They’ll undoubtedly be on the same page about making Avery’s well-being a priority.

General Hospital Spoilers: Carly Corinthos And Ava Jerome Are Never Going To Get Along

Although Carly and Ava are never going to get along, Carly may understand what Ava’s going through here. We can’t forget Carly was locked up at Ferncliff when she was perfectly sane. Due to their shared experience, Carly can at least nudge Sonny in a compassionate direction with Ava.

Carly will also have to deceive Josslyn Jacks (Eden McCoy) thanks to this Nik secret. It looks like Joss will bring up the idea of moving with Jasper “Jax’ Jacks (Ingo Rademacher) again, but Carly will have to shut it down. There’s no way Carly will let Joss get anywhere near the mess Jax, Nikolas and Hayden Barnes (Rebecca Budig) have created.

As for Jax, he’ll nearly reach his limit with Nikolas. General Hospital spoilers say Jax will angrily get in Nikolas’ face and insist he’s “this” close to blowing Nik’s cover. Luckily, Nikolas is pretty good at talking his way out of trouble. He’ll manage to keep Jax on board with their scheme for now.

Over with Hayden, she’ll continue to connect with Hamilton Finn (Michael Easton). Hayden will suggest that all Finn has to do is say the word and he can back out. She’ll seemingly just be joking around about Finn being on Daddy duty. However, Finn already adores Violet Barnes (Jophielle Love) and can’t wait to get to know her even better.

Other General Hospital spoilers say Robert Scorpio (Tristan Rogers) will speak with Anna Devane (Finola Hughes). She’ll give her statement about the recent Cassandra Pierce (Jessica Tuck) chaos, but he’ll shift gears and insist there’s something Anna should know. Robert will probably plan to fill Anna in on “Fayden’s” child, but it doesn’t look like he’ll blab after all.

Harrison Chase (Josh Swickard) will warn Robert at some point, so perhaps he’ll interrupt and argue that Robert shouldn’t cause “Fanna” issues. He won’t want Robert making a mess of Finn’s love life, but things are already messy! Anna will return home soon and find Finn bonding with Hayden, so that should bring some tension. It won’t be long until Anna faces the Violet shocker, which will make even more waves.

Finally, General Hospital spoilers say Charlotte Cassadine (Scarlett Fernandez) will stun her mom. When a relieved Lulu Spencer (Emme Rylan) wants to take Charlotte home, Charlotte will insist she’s not going with her. She’ll probably whine about going to Wyndemere, so Lulu will certainly be hurt by her daughter’s rejection.

Charlotte’s disdain for Lulu isn’t going to last, but it’ll still sting after the ordeal they’ve all been through. Lulu would love to be the one who comforts Charlotte, but it appears Charlotte will want Nina Reeves (Cynthia Watros) and Valentin Cassadine (James Patrick Stuart) instead.

Another great episode’s coming up, so stay tuned. We’ll give you updates as other GH news and rumors emerge. Stick with the ABC soap and don’t forget to check back often for the latest General Hospital spoilers, rumors, updates and news.