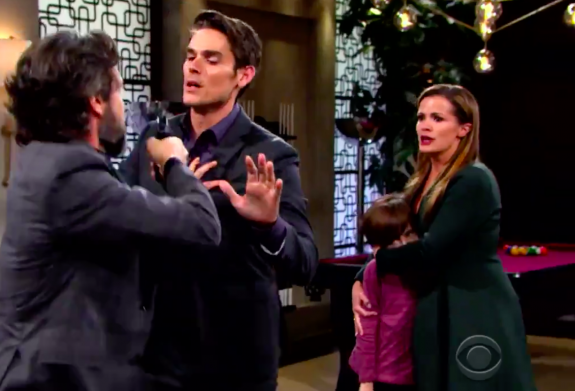 The Young and the Restless spoilers for Wednesday, November 13, tease that viewers are in for some exciting scenes. We should note that CBS is currently planning to preempt Wednesday’s episode of Y&R due to the impeachment hearings. But in the event the episode does air, here’s what you can expect.

Phyllis Summers (Michelle Stafford) and Abby Newman (Melissa Ordway) will reel as guests are checking out of The Grand Phoenix. Abby will be concerned that they won’t be able to recover from the hostage situation.

Meanwhile, Chance Chancellor (Donny Boaz) will talk with Amanda Sinclair (Mishael Morgan) at Crimson Lights. He’ll relay that he thinks that Katherine Chancellor’s (Jeanne Cooper) will and Simon Black (Jeffrey Vincent Parise) are linked. Amanda will say that she was emailed by someone who said he was Chance and put on retainer.

Chance will think that her resemblance to Hilary Hamilton (Mishael Morgan) is why she was retained. He’ll say that he’s going to get to the bottom of what’s going on, and Amanda will say that she did have one phone conversation with the person pretending to be Chance, and that he seemed older than she expected. Chance will leave, and Nate Hastings (Sean Dominic) will appear.

Next on Y&R, Chelsea Lawson (Melissa Claire Egan) and Adam Newman (Mark Grossman) will talk with Connor Newman (Judah Mackey), assuring him that Simon is gone and that he’s safe now. Connor will ask for his security blanket that he hasn’t wanted in years, and Adam will say he’ll retrieve it from Nick Newman’s (Joshua Morrow) house.

Meanwhile, at Nick’s house, he and Jack Abbott (Peter Bergman) will talk about what happened at The Grand Phoenix, and Jack will say they need to get out in front of the issue as far as Nick’s campaign is concerned. As Jack departs, Adam will arrive wanting Connor’s blanket. Nick will want some answers first about Chelsea’s connection to Simon, but Adam will not want to fight today. Nick will give him the blanket and Adam will leave.

Next on Y&R, Summer Newman (Hunter King) will talk with Kyle Abbott (Michael Mealor) about Theo Vanderway (Tyler Johnson). Kyle will complain about Theo and the recent goings-on that Summer missed while she was away. Summer will understand his feelings, but she won’t take sides. Lola Abbott (Sasha Calle) will arrive as Summer is touching Kyle’s face. Summer will leave and Kyle will thank Lola for being his perfect match.

Billy Abbott (Jason Thompson) will then arrive for a meeting with Kyle, during which he’ll challenge Kyle about his decision-making. Billy just won’t trust Kyle’s instincts, and Kyle will fire back about how Billy handled things when he was CEO. They’ll be arguing when Jack arrives and yells that they’ll have to figure this out together. Afterwards, Billy will tell Kyle to hit reset on his marketing plan, and Kyle will leave.

Next on Y&R, Ashley Abbott (Eileen Davidson) will talk with Theo at the Abbott estate. She’ll tell Theo that she always felt like an outsider because John Abbott (Jerry Douglas) wasn’t her father. They’ll chat for a while, and soon Ashley will ask Theo to come work for her in Paris. Theo will be floored.

Meanwhile, Chance will arrive at The Grand Phoenix and he’ll tell them that he’ll release a statement designed to help the hotel. Chance will clearly be interested in Abby and the two will have a nice chat. Nate will then show up, and Chance will remember that Nate was the surgeon when he donated a portion of his liver. After Nate leaves, Chance will invite Abby out for a drink, and she’ll accept.

Next on Y&R, Adam will return home to find Connor asleep. He’ll be upset with Chelsea for hiding what was going on with Simon because Connor is now suffering for that. Chelsea will promise that they’ll work together before heading home to see Nick. Later, Chance will arrive, and Adam will thank him for saving Connor’s life. Phyllis will then arrive, saying she had a sneaking suspicion that they’d be together.

Back at the Abbott estate, Jack and Ashley will chat. She’ll think that Jack should have eased Kyle and Billy into their situation together, and she’ll tell Jack that she offered Theo a job with her in Paris. Jack will be upset by this, but Ashley will think that Theo won’t have to live under a cloud of suspicion overseas.