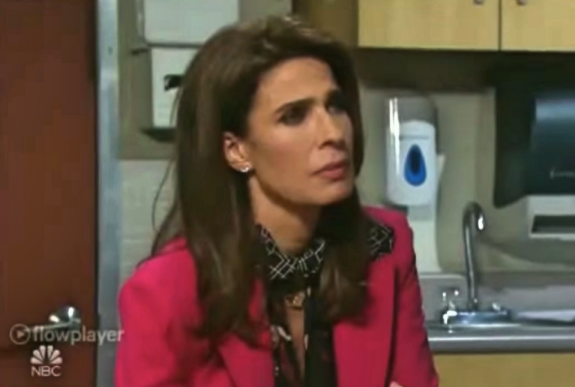 Days of Our Lives (DOOL) spoilers for Thursday, November 14, tease that Gabi DiMera (Camila Banus) will be thriving in a new romance with Eli Grant (Lamon Archey). Of course, it’s not entirely new since they’ve been together before. Thanks to Gabi’s blackmail plot, she was able to destroy Eli’s relationship with Lani Price (Sal Stowers) and set up this “Geli” reunion.

DOOL Spoilers: Gabi DiMera Will Be Thriving With Eli Grant

DOOL fans can expect some lovey-dovey moments for Eli and Gabi on Thursday. They’ll probably talk about finding love again, but Gabi will soon share something concerning. She’ll explain her suspicions regarding Chad DiMera (Billy Flynn) and whatever plot he’s cooking up. Gabi won’t know the details, but she’ll definitely feel like Chad’s out to get her.

Days of Our Lives Spoilers: Salem Flashes To The Future! – Chabby Is Back, JJ Is Off The Rails

Eli may suggest that Gabi’s being paranoid or he might take the threat seriously. It all depends on what his instincts tell him, but Gabi will be sure Chad’s scheming – and she’s absolutely right. Across town, Chad will open up to Abigail DiMera (Kate Mansi) about someone who could help with his sneaky plan. He’ll confess that he’s been in touch with Stefano DiMera (last played by the late Joseph Mascolo).

Abigail may have her doubts, but Chad will be positive the messages he’s receiving are legit. He may argue that Stefano knows things only Stefano would know. However, Chad hasn’t had a face-to-face meeting since Stefano resurfaced. That part of this story will bother Abigail in the coming episodes and could indicate things aren’t quite as they seem.

Days Of Our Lives Spoilers: Lani Price’s Having A Difficult Time

Meanwhile, Days viewers will be brought up speed on Lani’s situation. Unfortunately, her circumstances are pretty difficult at the moment. The latest buzz suggests Lani went a bit crazy after her awful breakup. In DOOL’s winter promo, Abe Carver (James Reynolds) reveals to Eli that Lani’s gone – but where? It doesn’t really matter since we’ll ultimately see Lani wherever she may be! She’s still alive, which is a relief since other Salemites didn’t survive the time jump.

One of those deceased Salemites is Haley Chen (Thia Megia), so JJ Deveraux (Casey Moss) is clearly struggling to deal with his loss. On Thursday, Days of Our Lives spoilers say JJ will rip into Brady Black (Eric Marsolf). There was already plenty of tension at that AA meeting, so it seems JJ holds Brady responsible for Haley’s death – at least on some level.

Kristen DiMera’s (Stacy Haiduk) baby drama should fit into all that, but the full mystery will unravel slowly. Days of Our Lives spoilers say some exciting scenes are coming up, so stay tuned. We’ll give you updates as other Days news and rumors emerge. Stick with DOOL and don’t forget to check back often for the latest Days of Our Lives spoilers, rumors, updates and news.