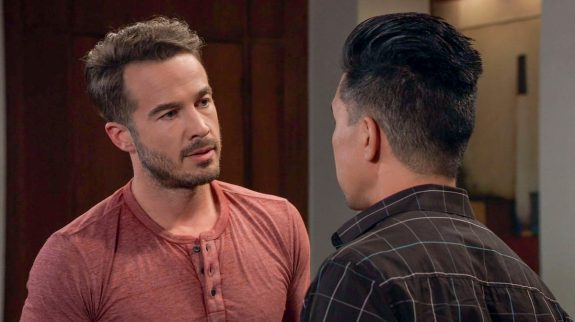 Brad Cooper just recently came from cornering Liesl Obrecht, (Kathleen Gati) and confronting Julian Jerome (William DeVry) in a previous episode of General Hospital. Julian, of course would not carry any weight with Lucas any more since Lucas disowned him, but could still maneuver Lucas into finding some appropriate information that would really expose Brad for the weasel he is! Liesl could also arrange for Lucas to find some appropriate information – she could sneak into the lab and alter Wiley Cooper-Jones’ (Erik and Theodore Olson) medical records and Michael Corinthos’ (Chad Duell) records back to what they originally would have read, which would show a father-son relationship!

She may have access to Nelle Benson’s (Chloe Lanier) records also. Lucas almost caught Brad altering the records one time before when he unexpectedly came up behind him, but at that time Brad was trying to alter them to show Shiloh Archer (Coby Ryan McLaughlin) was the father and Willow Tait (Katelyn MacMullen) was the mother – which they were, of the original Wiley who died and was swapped for Jonah Corinthos! However, since Willow gave birth at Mercy Hospital, Brad may not be able to pull altering those records off!

Even though Julian admitted to Lucas that he was blackmailing Brad to leave Lucas, which caused Lucas to disown him, he is still in a mode of suspicion where his now separated husband Brad Cooper is concerned. The whole relationship and marriage came about on the predication that Brad would repent of his sneaky and dishonest ways, and would be straight arrow and no secrets kept. Lucas knows that has not been happening. Lucas may think back to the day he found Lucas looking at Wiley’s medical records and remember he had Michael’s up on the screen too – and wonder why!

He had Michael’s, Wiley’s and Shiloh’s. Now, at that time, as General Hospital viewers will recall, Lucas and Brad were worried about Shiloh trying to get custody of Wiley and Lucas could have rationalized that maybe he was trying to alter something between Wiley and Shiloh’s records to show no match, but why would he have Michael’s records up too? It’s possible Lucas may pull up those records again and Liesl might have fixed them!

It is November sweeps; and two storyline secrets have been revealed already; the one involving Dr. Hamilton Finn (Michael Easton) and Hayden Barnes’ (Rebecca Budig) baby, and the one involving Nina Reeves (Cynthia Watros) and Sasha Gilmore (Sofia Mattsson) being a fake daughter. Will GH let Michael find out Wiley is really Jonah, and that is what Lucas will confront Brad about?

It’s not likely that Julian will tell Lucas, but Obrecht might, and fix the medical records behind the scenes which will be more likely of a situation for Lucas to go back in and check the records!