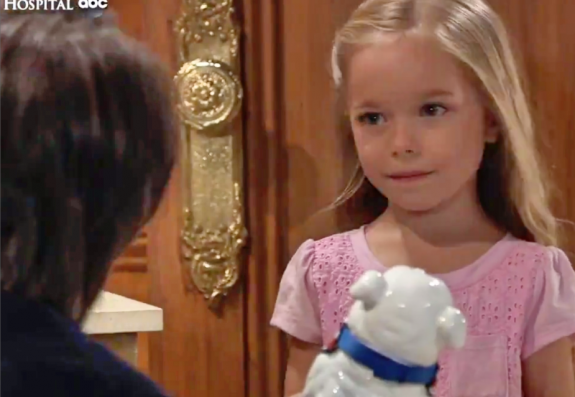 General Hospital (GH) spoilers for Thursday, November 14, tease that some exciting action’s coming up in Port Charles. We should note that due to impeachment hearing coverage, Wednesday’s show was preempted and will now air on Thursday. With that in mind, let’s get to all the drama!

GH Spoilers Valentin Cassadine Will Have Reunion With Charlotte Cassadine

Next, Robert will try to drop Hamilton Finn’s (Michael Easton) daughter bomb. He’ll keep getting interrupted until Anna finally dashes off to surprise Finn at home. That’ll leave Robert to divulge the daughter news to Harrison Chase (Josh Swickard), who’ll be hurt that Finn was holding out on him. Robert will suggest that it’s been a lot for Finn to take in as well, so maybe he just needed to process this.

Meanwhile, Finn will let Violet Barnes (Jophielle Love) know that he’s her dad. Violet will be thrilled to hear that Finn loves her and Roxy is now her sister. She’ll wonder where Finn’s been all this time, but he’ll just suggest that it was complicated. Finn will assure Violet that she’s always been loved.

After Violet scampers off to play, Anna will arrive and find Finn with Hayden. She’ll be taken aback since Hayden will be wearing Finn’s shirt and looking awfully cozy with him on the couch. Over with Charlotte again, she’ll refuse to go home with Lulu Spencer (Emme Rylan). Valentin will agree that they should stick to the schedule, so Charlotte will go back to Wyndemere with Valentin and Nina Reeves (Cynthia Watros).

Next, Charlotte will tell Nina and Valentin about her Cassandra Pierce (Jessica Tuck) ordeal. She’ll confess that Cassandra threatened to have Nina thrown in jail. Nina won’t like the fact that Charlotte put herself at risk to protect her.

After Lulu and Laura Webber (Genie Francis) join them, the whole gang will plan to have a snack together. Charlotte won’t buy this nice act they’re trying to sell. She’ll think it’s obvious they can’t stand each other, so Valentin and Lulu will privately get on the same page about doing better for Charlotte’s sake.

GH Spoilers: Charlotte Cassadine Will Tell Laura Spencer About The Man She Seen On The Pier

Charlotte will also tell Laura about the man she saw on the pier. General Hospital spoilers say she’ll insist she’s never seen him before, so Charlotte apparently doesn’t recognize Nikolas Cassadine (Marcus Coloma) from any pictures. Speaking of Nikolas, he’ll eavesdrop as Jordan Ashford (Briana Nicole Henry) talks to Jasper “Jax” Jacks (Ingo Rademacher). Jordan will grill Jax about the explosion Cassandra was killed in, but he’ll promise he doesn’t know anything.

Once Jordan’s gone, GH spoilers say Jax will have another confrontation with Nikolas. He’ll blame Nik for blowing up Cassanda’s boat, but Nikolas will insist it had to have been Valentin. At Shadybrook, Ava Jerome (Maura West) will thank Sonny Corinthos (Maurice Benard) after he brings Avery Corinthos (Ava and Grace Scarola) by for a visit. Seeing Avery will certainly be a bright spot in Ava’s day.

Ava will also seem suspicious after the nurse brings her meds in. After Trina Robinson (Sydney Mikayla) pops in to chat about her schedule at the gallery, Ava will call her by the name “Kiki.” Over with Josslyn Jacks (Eden McCoy), she’ll be worried due to Carly Corinthos’ (Laura Wright) claims about Jax. Carly will insist there’s a bit of a situation and that’s why Carly can’t move in with her father.

Joss will wonder if Jax is in trouble, but Carly will assure her daughter that it’s just work. She’ll also manage to raise suspicions for Sonny later. Carly will fib about Jax potentially seeing someone and use that as the reason Josslyn can’t move in. Sonny will think it sounds like Carly has a problem with that.