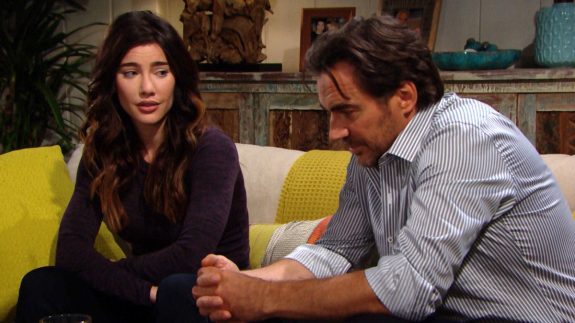 The Bold and the Beautiful spoilers for Thursday, November 14, tease that Ridge Forrester (Thorsten Kaye) will be fitting a gown on one of the Forrester models when Steffy Forrester (Jacqueline MacInnes Wood) arrives in the Forrester CEO office. Ridge will announce that this is Thomas Forrester’s (Matthew Atkinson) original design, and not his. Steffy will be impressed, and talk will turn to Thomas, who didn’t show up today for the fitting.

Neither Steffy nor Ridge will have seen or heard from Thomas, and Ridge will note that he didn’t see him nor Douglas Forrester (Henry Joseph Samiri) at the Forrester mansion earlier, but that he made a call and found out that Douglas was at school.

Next on B&B, Charlie Webber (Dick Christie) and Jack Maclaine (Todd McKee) will arrive and summon Steffy and Ridge to the storage area. Once there, they’ll explain that the hazard team is cleaning the vats that contained the hydrofluoric acid, and that they should be finished shortly. Steffy will remark about how dangerous the acid is, and Ridge will say that he doesn’t want anyone getting hurt.

The Bold and the Beautiful Spoilers: Thomas Sees Brooke and Logan Sisters as ‘Family-Destroying People’

Later, in the CEO office, Steffy will be preoccupied about safety given the situation in the storage area. Ridge will offer his reassurance, then talk will turn back to Thomas. Ridge will still be worried about the possibility of Hope Logan (Annika Noelle) wanting custody of Douglas. He’ll be concerned that Hope will keep pushing Thomas until he signs away rights to his son. Ride will then leave Thomas a message.

Bold And The Beautiful Spoilers: Hope Logan Struggles With Her Guilt

Next on B&B, Hope will still be deeply affected by what happened the night before with Thomas. As B&B viewers will remember, Hope pushed Thomas aside on the catwalk in the storage area, and he fell into the vat that she later learned contained hydrofluoric acid. Hope will try to text Thomas, but she’ll get no response.

Brooke Forrester (Katherine Kelly Lang) will then join Hope, and Hope will once again tell her mother that she killed Thomas. Liam Spencer (Scott Clifton) will show up, saying that Beth Spencer (River Davidson and Madeline Valdez) is settled in with the babysitter and he’s going to take off, but then he’ll sense that something is wrong with Hope.

Liam will inquire about what’s going on, and he’ll state that he wants to hear about what happened with Thomas last night. Hope will relay that Thomas signed the papers giving her joint custody of Douglas – she’s now Douglas’ adoptive mother. Liam will be stunned that Hope really found a way to get Douglas away from Thomas. He’ll think that this will change things for them all, and that Thomas will always be a part of their lives going forward.

Next on B&B, Liam will share that he’s leaving Forrester Creations to work with Bill Spencer (Don Diamont) at Spencer Publications, but he’ll be concerned about Thomas possibly stalking Hope at Forrester. Brooke will reassure him and will ask him to tell Bill that they’re happy about this development.

Liam will then leave, even though he’s still not sure that Hope’s really ok. Hope will lament to Brooke that she doesn’t want to lie to Liam, and she’ll once again state that Thomas is dead and that she’s responsible. Brooke will try to reassure her, and she’ll say that they can get through this – Hope was just trying to protect Douglas from Thomas.