The Young and the Restless Spoilers: Monday, November 18 – Nick Drops Out Of City Council Race – Adam & Chance Have A Secret – Abby Distrusts Phyllis 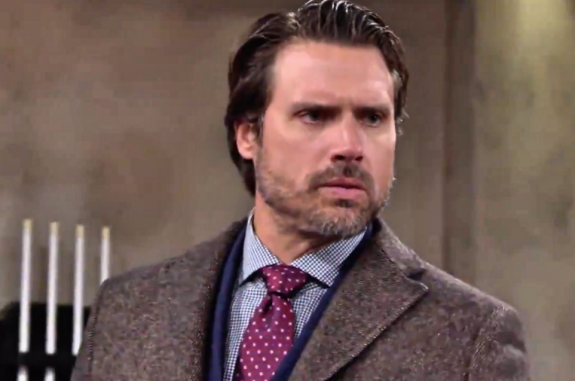 The Young and the Restless spoilers for Monday, November 18, tease that Abby Newman (Melissa Ordway) will speak with Rey Rosales (Jordi Vilasuso) at The Grand Phoenix about her recent cancellations and about Phyllis Summers’ (Michelle Stafford) security system. She’ll want to make sure that nothing like the hostage standoff happens again, but Rey will think that Simon Black (Jeffrey Vincent Parise) was one step ahead of everyone.

Abby will be peeved about Chelsea Lawson (Melissa Claire Egan) being involved with Simon and will want Rey’s help getting Phyllis out for good, but Rey won’t be able to help her. Kevin Fisher (Greg Rikaart) will then show up looking for Chelsea. Abby will say that Chelsea’s not around and that she’s not a fan right now, and she’ll wonder why Kevin’s so concerned about her. Kevin will remark that Abby’s paranoid.

Next on Y&R, Phyllis, Chance Chancellor (Donny Boaz), and Adam Newman (Mark Grossman) will chat at Adam’s penthouse. Neither of the men will want Phyllis there, but she’ll persist. She’ll want to discuss saving her hotel from threats from within, referring to Chelsea. Adam will say that she needs to talk with Chelsea if she has questions.

Once Phyllis leaves, Chance will express concern that she picked up on something in Las Vegas. Adam will say that Phyllis doesn’t know anything, and Chance will remark that it would be bad for them if she ever found out what really happened there. Adam will say that he’ll handle Phyllis. Chance will say she’s Adam’s problem for now, but to make sure she doesn’t become their problem.

Next on Y&R, Billy Abbott (Jason Thompson) will surprise Victoria Newman (Amelia Heinle) at her office. He’ll be feeling amorous, but she’ll still have a video conference to attend. Finally, she’ll lock the door and they’ll make love. Later, Victoria will say that she loves it that Billy is exciting and unpredictable. Victoria will have her conference, then Billy will call her a star and they’ll canoodle.

Meanwhile, at the Newman Ranch, Nikki Newman (Melody Thomas Scott) and Jack Abbott (Peter Bergman) will talk about the hostage situation at The Grand Phoenix. Victor Newman (Eric Braeden) will appear, worried about Connor Newman (Judah Mackey). Jack and Nikki will discuss Nick Newman’s (Joshua Morrow) campaign, and Jack will think they should ride out the hostage situation.

Victor will then pipe in, saying that they should be concerned about the damage to Nick, not to his campaign. After Victor steps out, Nikki will tell Jack that he never wanted Nick to run for public office. They’ll discuss strategy some more, and Jack won’t want to give up.

Y&R Spoilers: Nick Newman Drops Out Of The Race

Next on Y&R, Nick will be on the phone handling a reporter and say that he’s continuing his campaign and will soon put out a formal statement. Chelsea will overhear, worried. Nick will tell Chelsea that everything is out of control and that it could be worse, as the police are going to have questions about her association with Simon. Chelsea will think that Nick should lash out out at her, but Nick won’t.

Chelsea will say that she’ll confess to the press to get them off Nick’s back, but Nick will say that she could go to jail and that it would only heighten concerns about his judgment. He’ll tell Chelsea that they’re in it together. Chelsea will tell Nick not to give up on his dreams, but late he’ll tell her that he’s made a decision. He’ll call Jack to say that he’s ending his run for city council to focus on his family.

Next on Y&R, Phyllis will have a chat with Kevin, and she’ll reveal that she saw the video footage of him and Chloe Mitchell (Elizabeth Hendrickson) dressed up as Federal agents. She’ll say that she thinks there’s a connection between Simon, Chance, and Chelsea. Kevin will deflect and say that Phyllis knew there was trouble brewing, too, but that she kept quiet because she wants to take back the hotel.

Finally, on Monday’s new episode of Y&R, Phyllis will chat with Abby, who will still think that Phyllis is up to something with the security system. Phyllis will deflect by griping about Chelsea damaging their business.