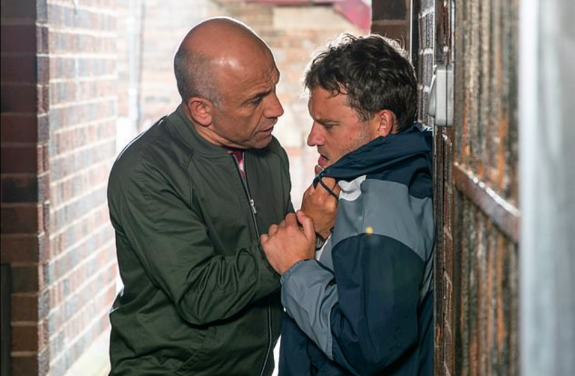 Coronation Street spoilers reveal that the end is coming for Kel Hinchley (Joe Alessi). Fans have been waiting for justice to be served. It seems that will finally happen when the sexual abuser’s wicked past is exposed. Paul Foreman (Peter Ash) will not only get justice, but peace and healing as well.

Corrie spoilers indicate that Paul has endured emotional and mental anguish for years. Groomed and sexually abused by a pedophile as a young teen, Paul had a revelation after Kel’s return. He wasn’t a willing participant like he was deceived to believe.

Not only did the wicked character sexually abuse young Paul, he basically used mental manipulation to continue victimizing the character.

The Paul/Kel storyline will mesh into a separate plot. Billy Mayhew (Daniel Brocklebank) suspects Bernie Winter (Jane Hazelgrove) stole his diary. His accusation is due to Bernie starting work as a cleaner the same day the item was taken.

However, Paul and Gemma Winter (Dolly-Rose Campbell) realize that there was someone else that had access — Kel Hinchley.

Gemma and Bernie decide to find out the truth by breaking into his flat. While doing some cross-checking on a computer, they come across shocking photos of young boys. One child is very familiar to the Winter girls… it is Bernie’s son and Gemma’s brother, Paul Foreman.

Paul is confronted with what Bernie and Gemma found. Finally, Paul opens up and tells them what Kel did to him as a child. Gemma wants Paul to report the pedophile to the police. However, he would rather not relive the past and believes it would be too traumatic.

However, they simply can’t let Kel get away with abusing Paul and other children. Something has to be done. If Paul refuses to go to the authorities, then they might take matters into their own hands.

The Sun Online reported that Bernie will try to kill Kel for what he has done. A source told the publication that Bernie goes into a violent rage. It was also teased that the scene will be explosive.

Note that the source didn’t say she would murder the villain, but that she would try to. This is open to interpretation, but one has to wonder if she will get vengeance for her son. Does Kel Hinchely die in Corrie? Or will there be a plot twist that fans won’t expect?