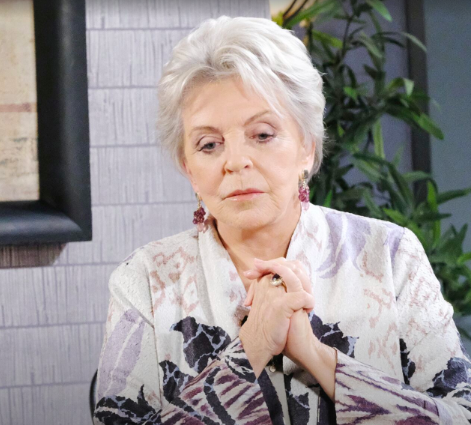 Days of Our Lives (DOOL) spoilers for Friday, November 15, tease that Lani Price (Sal Stowers) will listen to Kristen DiMera’s (Stacy Haiduk) terrible tale. DOOL just revealed that Lani and Kristen are nuns, so they’ll bond over the suffering that caused them to leave Salem. Kristen will talk about her worst nightmare, which undoubtedly involved her baby’s death and losing Brady Black (Eric Martsolf).

While Kristen opens up, Princess Gina (Kristian Alfonso) will sit down to a special dinner with John Black (Drake Hogestyn) – complete with wine and candles. It’s clear that Princess Gina put a lot of effort into this special evening, but John probably won’t understand that she’s making her move. To John, this will still seem like “Hope Brady” sitting across from him.

Days Of Our Lives Spoilers: Stefano DiMera – Or A Doppelganger? Could Dr. Rolf Have Put Stefano’s “Essence” In Stefan DiMera’s Body, Complete With A New Heart?

Princess Gina will get John to talk about how much he misses Marlena. She’ll probably throw some shade at “Doc” and act like John’s being neglected. John mentioned some challenges in his relationship, and it turns out those are because they’re doing the whole long-distance thing right now. Marlena’s in the middle of a residency in another town, but she’s about to return home and surprise her love.

Days of Our Lives spoilers say Princess Gina will spill some wine on her top – or at least pretend to! It might just be an excuse to strip down and try to seduce John. Whatever the case, it’ll create an awkward scene once Marlena comes strutting in.

Days Of Our Lives Spoilers: Kayla Johnson Will Head Home To Meet With Someone Shocking

Over with Kayla Johnson (Mary Beth Evans), she’ll head home as well and meet up with someone shocking. Kayla’s in a brand-new relationship…with Justin Kiriakis (Wally Kurth)! Days of Our Lives spoilers say they’ll settle in for a lovely night together, which will ultimately involve eating cake and reflecting on their romance.

Other Days spoilers say Julie Williams (Susan Seaforth Hayes) will battle chest pains. Her heart will start racing like crazy, so that pacemaker of Gabi DiMera’s (Camila Banus) will be going off the rails! Could this eventually lead to Gabi’s exposure? Time will tell, but this doesn’t sound like good news for Julie right now.

It sounds like some great drama’s on the way. We’ll give you updates as other Days details and rumors emerge. Stick with DOOL and don’t forget to check back often for the latest Days of Our Lives spoilers, rumors, updates and news.