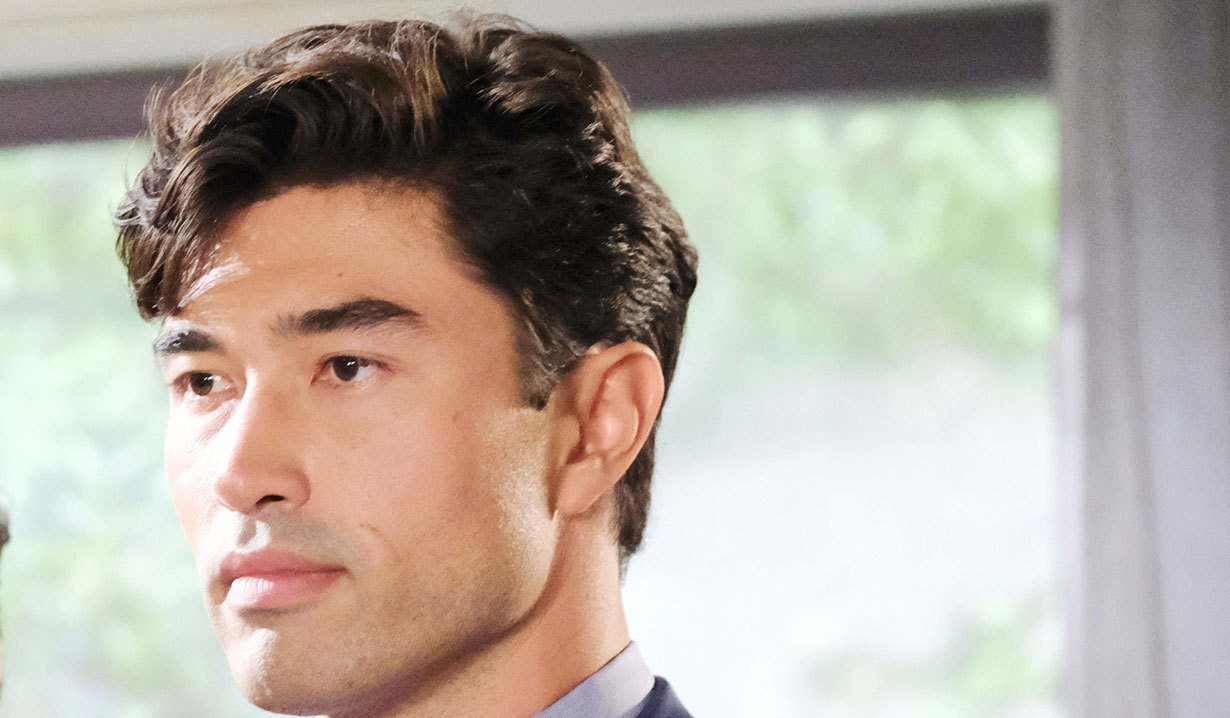 Days of Our Lives spoilers reveal that Remington Hoffman makes his debut on the NBC soap opera. For those that haven’t seen the digital companion series Chad & Abby in Paris, the actor portrayed Li Shin. How will he handle Chad DiMera (Billy Flynn) and DiMera Enterprises?

DOOL spoilers confirm that Mr. Wei Shin (Michael Hagiwara) has a son named Li Shin, who is also involved with DiMera Enterprises. Fans briefly met the character on the finale of Chad & Abby in Paris. At first, Li fired Chad for sexual harassment. However, it was later teased that there was evidence that suggested Chad was innocent of Juliette’s (Rachele Schank) claims.

However, due to Jennifer Horton’s (Melissa Reeves) comatose condition, “Chabby” ended up returning to Salem.

It is revealed that after the time jump, Chad will be mostly focused on business. That must mean he is back as CEO of DiMera Enterprises. However, there will still be competition and conflict. Apparently, Chad thinks that Gabi Hernandez DiMera (Camila Banus) is up to something, and she also believes the same about Chad. It is possible that we will be seeing a lot more of Li Shin as Chad tackles the corporation.

Days of Our Lives spoilers suggest that Chad and Gabi won’t be the only ones involved in DiMera Enterprises. Remember, there were a lot of people who wanted the CEO position. While Chad is the best choice, that doesn’t mean others won’t be doing some scheming.

There is also DiMera’s competition, Victor Kiriakis’ (John Aniston) company, Titan. The two businesses used to have a lot of wars and it is hinted that may continue.

Days of Our Lives Spoilers: Chad Determined To Fix Broken Past – Leaves Troubles Behind In Paris https://t.co/lqsJeYP2MU pic.twitter.com/WU2YO6yyLL

The Days of Days event that is being held this weekend revealed a lot of interesting storylines to expect. According to Soaps.com, look forward to Chad believing that Stefano DiMera (formerly Joseph Mascolo) is back in town. He also confesses to Abigail DiMera (Kate Mansi) that he has been in contact with his father.

Well, it turns out that Stefano might return as Princess Gina (Kristian Alfonso) calls a man “Steffy.” Since the legendary actor is deceased, fans hope Stefano won’t be recast.

The most likely scenario is that Dr. Rolf (William Utay) will implant Stefano’s memories into someone else. This is similar to what he did to Hope Brady when he transformed her into Princess Gina. Will “Stefano” try to reclaim the role of being the one in charge of the DiMera estate and company? How will Li handle this? Fans will just have to wait and see how this storyline develops.