Days Of Our Lives Spoilers: Stefano DiMera – Or A Doppelganger? Could Dr. Rolf Have Put Stefano’s “Essence” In Stefan DiMera’s Body, Complete With A New Heart? 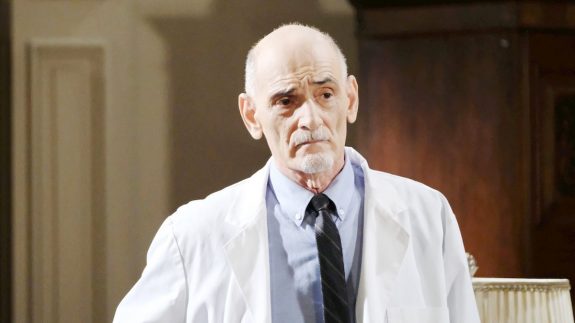 As Days of Our Lives viewers know, Stefano DiMera has been missing for over three years, other than brief mentions of the character’s name now and then. There was also a door in Dr. Wilhelm Rolf’s (William Utay) “resurrection warehouse” in Nashville with the initials “SD” on it which were assumed to stand for “Stefano DiMera”. As the show came closer and closer to the one year time jump, Stefano’s name was mentioned more and more, which caused fans to wonder if the powers that be were considering a recast Stefano.

Joe Mascolo, the actor who portrayed him, passed away in real life in 2016 and some fans feel like he can never be replaced. However, the most recent Days of Our Lives promo, “Salem Flashes Forward” shows Princess Gina (Kristian Alfonso) talking to a man she refers to as “Steffy” and shows his hand with a DiMera ring, with a cigar, and playing chess. However, the hand appears to be that of a much younger man than Stefano would be now! Perhaps Rolf invented a youth serum?

DOOL Spoilers – There Are At Least Two Doppelgangers Already In Salem

There are two doppelgangers in Salem already, Princess Gina, who of course is really Hope Brady (Kristian Alfonso), and Hattie Adams (Deidre Hall) who is Dr. Marlena Evans’ (Deidre Hall) doppelganger is Eve Donovan’s (Kassie DePaiva) cellmate! Even Adrienne Kiriakis (Judi Evans) had a doppelganger at one time, named Bonnie Lockhart! Doppelgangers are exact lookalikes to people who also impersonate the people they look like! While it would be impossible to find an exact doppelganger for Stefano physically, it is a possibility that Stefano could live on in another body thanks to Rolf putting his “essence” in a new body! Stefano would be 90 years old now, having been born March 13, 1929, so it might be time for a new body if the Phoenix could get one!

Longtime Days of Our Lives viewers will recall that Stefano has “died’ thirteen times and then came back alive during his years on the show. That’s why they call him “The Phoenix”, meaning the one who rises from the ashes! At times Days of Our Lives has had him make appearances in flashbacks, or with other characters in Stefano disguises, but it looks like Stefano’s reappearance will be done differently this time, with a newer, younger, body!

Rolf may indeed have created a youth serum and gave it to Stefano but he could have done something else too – similar to what he did to make Hope into Princess Gina, only in a different way! Princess Gina mentioned that she felt no “essence”of Hope inside herself in a recent episode – could Rolf have found a way to capture Stefano’s “essence” and put it inside a newer, younger body?

Brandon Barash, who “died” on the show as Stefan O. DiMera, the youngest son of Stefan DiMera with Vivian Alamain (Robin Strasser) is coming back and has been said to be filming. Days of Our Lives does film six months ahead, but the time jump is said to have also shortened filming cycles for the show, so he could show up sooner than six months. It has not been revealed whether he was coming back as Stefan DiMera or another character, however.

If Rolf put Stefano’s “essence” into a newer, younger body, could it be Stefan’s? Keep in mind Stefano could be shown only as his hand for a few months, keeping the actor’s identity a mystery. The company who made Steve Johnson’s (Stephen Nichols) bionic eye and the pacemaker controller that Gabi DiMera (Camila Banus) threatened to use as a weapon against Julie Williams (Susan Seaforth Hayes) may make bionic hearts; thus giving Stefan’s body a heart.