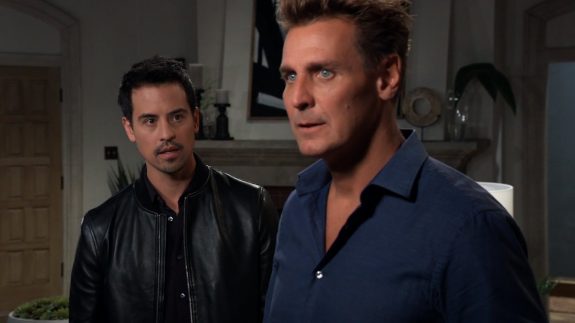 General Hospital Spoilers: Brook Lynn Returns To Port Charles! – Does She Share A Past With Dustin?

Charlotte refuses to go home with Lulu. Charlotte says it’s Valentin’s week and she wants to go home. Lulu and Laura agree. Charlotte hugs her mom before leaving the police station. Robert tells Anna she made a nice entrance. Anna wants Robert to catch her up on things. Lulu didn’t want to let Charlotte go with Valentin. Laura says they need to find a better way. Meanwhile Harrison Chase (Josh Swickard) questions the prison guard, who denies knowing who paid her.

General Hospital’s Nikolas Cassadine (Marcus Coloma) shows up at Jasper Jacks’ (Ingo Rademacher) house. Valentin threatens to turn Nik in to the cops. Jax tells Nik that he has agreed with Sonny and Carly to keep the peace for Jocelyn. Jax tells Nik it is time a smart businessman would cut his losses. Jordan arrives and wonders why Jax’s stolen credit card was used to help Cassandra escape.

Jordan tells Jax that Cassandra was killed last night. Jordan says he could be in the middle of a murder investigation. Jax says he didn’t have anything to do with Cassandra’s death. Jordan leaves and Jax accuses Nik of murder. Nik tries to convince Jax that Valentin killed Cassandra. Valentin issues a final warning to Nik.

General Hospital’s Jocelyn Jacks (Eden McCoy) is telling Trina Robinson (Sydney McKayla) that she wants to move in with her dad. Jocelyn asks Carly Corinthos (Laura Wright) if she had a bad night. Trina leaves to go check in about her internship. Jocelyn wants to talk about moving in with her dad part-time. Carly tries to explain to Jocelyn that Jax has something going on right now so she has to wait to move in with him. Jocelyn says she is all over the place. Jocelyn misses feeling confident.

Sonny interrupts Carly and Jocelyn’s talking. Carly asks Sonny to make more of an effort with Jax. Sonny wonders why Jocelyn can’t stay with Jax more. Carly wants Sonny to be kind to Jax like she has Dev Corbin (Ashton Arbab). Carly lies and says Jax has a girlfriend. Sonny tells Carly she seems to have an issue with Jax having a guest not him. Jocelyn is in her room writing.

General Hospital’s Sonny Corinthos (Maurice Benard) brings Avery Corinthos (Ava and Grace Scarola) to see Ava Jerome (Maura West). Sonny has brought Avery because she was asking for her mom. Sonny doesn’t want Avery to be afraid to ask for help when it comes to mental illness.

Sonny tells Ava he wants her to get better for Avery’s sake. Sonny and Avery leave for school. Ava thanks Sonny for bringing her by. Trina visits Ava telling her she can’t go to the gallery because she got in trouble. Ava calls Trina by someone else’s name and corrects herself.

General Hospital’s Hayden Barnes (Rebecca Budig) and Hamilton Finn (Michael Easton) prepare to tell Violet Barnes (Jophielle Love) that he’s her father. Finn tries to do some artwork with pancakes and syrup. Violet wants to go to the park. Finn tells Violet he’s her dad. Violet asks Finn if he loves her. Finn tells Violet more than she knows. Finn asks Violet for a hug. Violet hugs him fiercely.

General Hospital’s Valentin and Nina get Charlotte home. Valentin wants to know why Charlotte went with Cassandra. Charlotte tells Nina that Cassandra threatened to send Nina to jail if she didn’t go with her. Charlotte says that Cassandra said Nina did something bad and promised not to tell if she helped her escape. Nina tells Charlotte never to put herself in danger again.

Charlotte knew she would be ok because her papa always fixes things. Laura and Lulu show up at Windemere. Charlotte is furious when Lulu and Valentin try to be polite. Charlotte tells Laura she saw a man on the pier but didn’t recognize him. Laura tells Charlotte is was probably a dock worker. Stay tuned to the ABC soap and don’t forget to check back often for the latest General Hospital spoilers, rumors, updates and news.