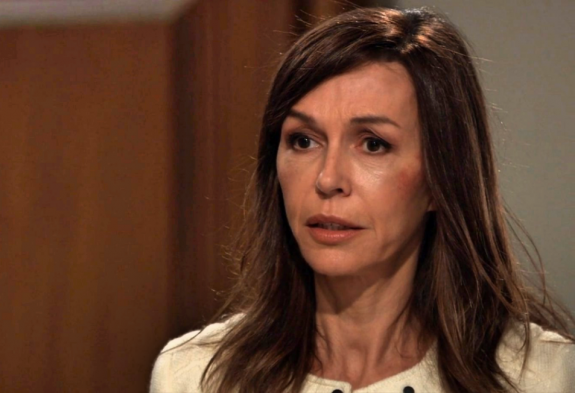 General Hospital (GH) spoilers for Monday, November 18, tease that some stunning moments are on the way. Before we get to those, we should pass along a programming note. It looks like GH will once again be preempted on Friday, November 15. The impeachment hearing coverage should bump Friday’s episode to Monday, but it’ll be worth the wait!

Sonny will move in close as he scowls at Cameron. He’ll talk about something being the safe choice, so maybe he’ll mean Cameron keeping his distance from Josslyn. Of course, Joss won’t go for that! Cameron is one of her best friends, and she’s responsible for her own decisions. Josslyn may intervene and assure Sonny that Cam’s not at fault for what she did.

However, Anna will probably give Finn the benefit of the doubt and allow him to explain. It won’t be long until Violet Barnes (Jophielle Love) runs in and joins this awkward gathering. Violet will wonder if Anna’s a friend of her daddy’s, so this mess is only going to get messier!

Other General Hospital spoilers say Julian Jerome (William deVry) will be fed up with Olivia Quartermaine (Lisa LoCicero). He’ll complain to Alexis Davis (Nancy Lee Grahn) at GH and argue that they have to do something about Olivia’s rats. Julian apparently assumes Olivia’s to blame for the dead rodent he found outside Charlie’s Pub, but he’s working with the wrong theory.

That rat actually got into the poisoned supplement, which Kendra Lennon (Michelle Argyris) dumped in the garbage. Julian already seems to think something’s a bit off about Kendra, but it doesn’t look like he’ll put together any poison puzzle pieces just yet. Over with Kim Nero (Tamara Braun), she’ll share a sweet goodbye with Monica Quartemaine (Leslie Charleson). Since Kim intends to leave town with “Drew Cain” aka Franco Baldwin (Roger Howarth), Monica will want a proper farewell.

On Monday, General Hospital spoilers say Monica will share her parting words with Kim. She’ll ask Kim to promise her that they’ll live happy lives, so Kim may suggest that’s the plan. There’ll be teary smiles and hugs as Kim prepares for her new chapter with “Drew.”

Unfortunately, this will feel like a true defeat for Scott Baldwin (Kin Shriner). He’ll talk to Liz about how hard they fought, but he’ll assume it just wasn’t enough. Liz will look both livid and distraught. She’s desperate to get her husband back, so she won’t be pleased about Kim fading off into the sunset with him.

Thankfully, that’s not going to happen. Jason Morgan (Steve Burton) will deliver some advice in Monday’s episode, which should prove pivotal for “Drew.” General Hospital spoilers say Jason will point out that whatever “Drew” chooses, someone he cares about will lose. It’s a terrible situation all around, but this conversation will cause “Drew” to reevaluate things.

Will “Drew” decide he can’t leave with Kim after all? Will he stay in Port Charles and even submit to the memory procedure willingly? Those seem like good options as this hot plot continues to heat up.