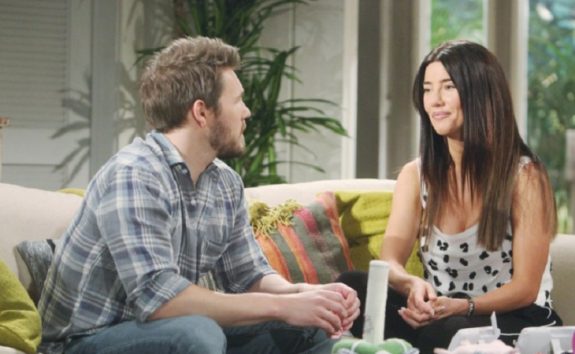 The Bold and the Beautiful spoilers for Monday, November 18, tease that Ridge Forrester (Thorsten Kaye) will be in utter disbelief. As B&B viewers know, he has been adamant that no one is going take Douglas Forrester (Henry Joseph Samiri) away from Thomas Forrester (Matthew Atkinson). He was livid when Brooke Forrester (Katherine Kelly Lang) had adoption papers drawn up, and he’s been suspicious of Hope Logan’s (Annika Noelle) sudden kindness toward Thomas.

The Bold and the Beautiful Spoilers: Liam Suspects Hope Isn’t Telling Him Everything About Adoption Victory

Well, on Monday’s B&B episode, Ridge will learn that Hope got Thomas to sign adoption papers allowing her to get partial custody of Douglas. According to B&B spoilers, Ridge will be furious to learn this, and he’ll directly confront Hope about it. It appears that he’ll show up to Brooke’s mansion, although exactly how he learns that Hope is now Douglas’ mother remains to be seen.

Of course, this confrontation will come at a stressful time for Hope. As B&B viewers know, Hope is under the impression that she killed Thomas when she pushed him, and he fell into a vat of liquid that she was later led to believe was hydrofluoric acid. Hope has been feeling terribly guilty about the incident, and she truly believes that Thomas is gone for good. This will likely be weighing heavily on her mind as Ridge fires questions at her about Thomas.

Of course, Ridge won’t know anything about what happened with the acid – he’ll just be seriously peeved about Thomas signing over some of the rights to his son. He’ll want answers from Hope about how she manipulated Thomas, and he’ll probably be confused since he hasn’t seen or heard from Thomas since the papers were signed.

Meanwhile, on Monday’s new episode of B&B, Liam Spencer (Scott Clifton) and Steffy Forrester (Jacqueline MacInnes Wood) will share a tender moment together. As B&B viewers know, Steffy and Liam have been spending quite a bit of time together lately. Liam has spent time at Steffy’s house with Kelly Spencer (Zoe Pennington) and Beth Spencer (River Davidson and Madeline Valdez), and they’ve really had some good family moments.

Of course, Liam and Steffy are on the same page when it comes to their girls spending time together and bonding, and it seems that they’ll spend some time talking about this on Monday’s B&B episode. They’ll have enjoyed reconnecting and letting the girls play together, and they’ll want that to continue as often as possible.

One wonders whether Liam will share the news about Hope adopting Douglas with Steffy during this visit as well. As B&B viewers know, Liam was floored by the revelation that Hope got Thomas to sign the adoption papers and give her legal rights to Douglas, and Steffy will probably be just as surprised when she finds out. In fact, she’ll probably have the same reaction as Ridge – total outrage.