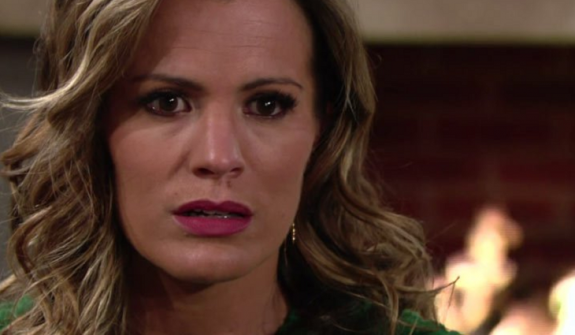 The Young and the Restless (Y&R) spoilers update for Monday, November 18, teases that secrets and surprises will abound. Before we get to those, we should pass along a programming note. It looks like Y&R will once again be preempted on Friday, November 15. The impeachment hearing coverage should push Friday’s episode to Monday, so keep that in mind.

As for what’s happening in Monday’s show, let’s dive right in. At the Grand Phoenix, Abby Newman (Melissa Ordway) is still fuming over cancellations and the damage to the hotel’s reputation. She talks to Rey Rosales (Jordi Vilasuso) about the security system and Phyllis Summers’ (Michelle Stafford) role in resolving the crisis.

Abby doesn’t think one shining moment means Phyllis is a real hero. She argues that if Phyllis had been doing her job, she wouldn’t be trying to save her hotel again. Abby also gripes about Chelsea Lawson (Melissa Claire Egan) and her link to Simon Black (Jeffrey Vincent Parise). She circles back to Phyllis and trying to get info that’ll push her out for good, but Rey’s hands are tied.

Rey passes Abby off to Kevin Fisher (Greg Rikaart) instead and notes that he can answer any security questions. Abby talks about Chloe Mitchell (Elizabeth Hendrickson) and how glad she is Chloe wasn’t there with Bella Fisher (Martie Blair) during the drama. Kevin keeps trying to steer the conversation to Chelsea, which Abby finds suspicious. She wants to know what’s really going on, but Kevin brushes her suspicions off as paranoia.

At Adam Newman’s (Mark Grossman) penthouse, he’s annoyed with Phyllis for barging in and making herself at home. She pours a drink and speaks with Phillip “Chance” Chancellor IV (Donny Boaz) about threats within. Adam suggests that Phyllis make her point quickly, so she ultimately asks Chance about Chelsea. Is her business partner a liability? Chance wouldn’t divulge anything to Phyllis even if he knew.

Adam feels like this is just a fishing expedition and wants it to end right now. He hurries Phyllis along, but she reminds him she knows all his tricks and has seen things. That’s why Phyllis can’t buy that Adam’s changed. Once Phyllis is gone and Adam checks on Connor Newman, Chance is still there to finish up their discussion. Adam wonders what’s left to discuss, so Chance brings up what Phyllis might know from Vegas. Phyllis could cause big trouble if she knew what actually happened.

Adam points out that Phyllis simply saw them in a room together. He doesn’t think Phyllis knows more than that, so Chance agrees to let this be Adam’s problem. He hopes Adam won’t let it turn into their problem instead.

Back with Phyllis, she finds Kevin and mentions his “Agent Fisher” charade. Phyllis saw the footage of Kevin and Chloe posing as the Feds, but Kevin suggests it was for a costume party. Naturally, Phyllis doesn’t buy it. She wants to figure out how Chelsea, Chance and Simon are connected, but Kevin isn’t interested in helping. He thinks Phyllis just wants to regain full ownership of the hotel. Phyllis points out that Kevin has a very active imagination and should write sci-fi.

Next, Phyllis and Abby spar about the usefulness of the security system. Abby is still convinced Phyllis is up to something. When it comes to looking for answers, Abby feels like that system is a good place to start. At Newman Enterprises, Billy Abbott (Jason Thompson) pushes to make love in Victoria Newman’s (Amelia Heinle) office. She protests due to a looming conference call, but he keeps canoodling until she relents.

Later, Billy want to be sure it was all right that he stopped by and surprised her like this. Victoria’s drawn in by Billy’s exciting, unpredictable nature. She assures Billy that he’s the love of her life. Billy jokes that Victoria makes him sound like a mixture of James Dean and Prince Charming.

Young And The Restless Spoilers: Jack Abbott And Nikki Newman Discuss How Nick Newman Can Weather The Political Storm

At the ranch, Jack Abbott (Peter Bergman) and Nikki Newman (Melody Thomas Scott) discuss how Nick Newman (Joshua Morrow) can weather his political storm. Nikki poses potential strategies, but Jack shuts them down. It’s really best to just ride this out and hope for the best. Victor Newman (Eric Braeden) points out that he’s more concerned about the damage to Nick’s character than his campaign.

The Young and the Restless Spoilers: Chance Chancellor Genoa City’s Most Eligible Bachelor – Phyllis and Abby Vie For His Attention https://t.co/S5SewpD5VQ pic.twitter.com/D1U08M9t3P

At home, Nick deals with a reporter over the phone and is frustrated when he hangs up. There have been so many emails, calls, etc. Nick feels like things are just going to get worse. Chelsea knows Nick must be angry with her and urges him to let her have it. Nick doesn’t think that would solve anything. He wants to get through this together, but Chelsea still feels guilty.

After Chelsea suggests she should just find a media truck and confess, Nick disagrees. A confession could put Chelsea behind bars and wouldn’t help him. It’d just make people question Nick’s judgment even more. Chelsea doesn’t want Nick to give up on his dream because of her, but he eventually decides that’s what he must do. He calls while Jack’s still at the ranch with Nikki and Victor.

Nick informs them that he’s dropping out of the race to focus on his family. He intends to release a statement later, but will Nick stick to the plan? The Young and the Restless spoilers say some great drama’s brewing no matter what! We’ll give you updates as other Y&R news and rumors emerge. Stay tuned to see what’s next in Genoa City.