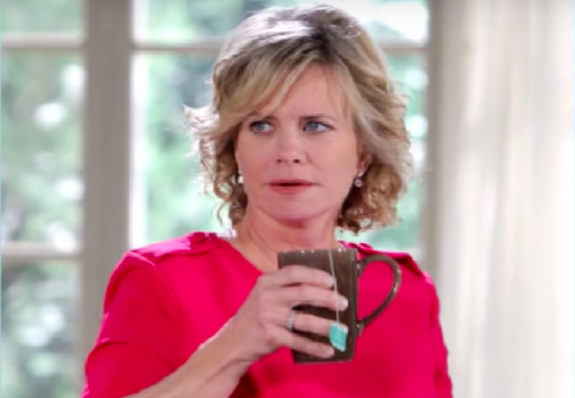 Days of Our Lives (DOOL) spoilers for Monday, November 18, tease that Abigail DiMera (Kate Mansi) will bicker with Chad DiMera (Billy Flynn). They won’t be on the same page after Stefano DiMera (last played by the late Joseph Mascolo) replies to Abigail’s message. Stefano will wonder why Abigail’s poking her nose in her husband’s affairs, she’ll start typing a message that Chad doesn’t approve of.

After Chad warns Abigail not to hit send, Jack Deveraux (Matthew Ashford) will appear. Chad and Abigail will pretend they were arguing about something trivial before Abigail has a chat with her dad. They’ll discuss Jennifer Horton’s (Melissa Reeves) miraculous recovery and all the tough updates she’ll have to face. However, there was at least some good news for Jenn since “Chabby” are back in town.

Days of Our Lives Spoilers: Steve Returns to Find Kayla Has Moved On – Can ‘Stayla’ Survive Their Newest Obstacle?

Jack will be proud of Abigail for stepping up to be his number one reporter at The Spectator. Abigail will hint at a hot story she’s chasing, so Jack will wonder if she’s going to fill him in. After Chad interrupts and gets rid of Jack, he’ll argue with Abigail once again. Chad will point out that this isn’t just a story; it’s about their lives. They’ll also get back to hashing things out over Abigail’s message to Stefano.

Chad will feel like they can’t be too harsh or else Stefano’s just going to vanish again. They need his help to take down Gabi Hernandez (Camila Banus), so Chad won’t want Abigail to blow this. She’ll sent a more pleasant message and get a fast response. Stefano will agree to a face-to-face meeting with Chad on one condition, so it’ll be interesting to see what he has in mind.

Days Of Our Lives Spoilers: Marlena Evans Will Get An Explanation

Over with Marlena Evans (Deidre Hall), she’ll get an explanation for the strange scene she came home to. “Hope Brady” aka Princess Gina will talk about being a klutz with her wine and having to take her top off. John Black (Drake Hogestyn) will be surprised to see Marlena since she wasn’t due back until Christmas. Marlena will explain she worked it all out with her job and can finish her residency in Salem.

When Marlena suggests John doesn’t need a roommate, “Hope” will wonder if she’s being thrown out. Marlena will suggest she’d really like to be alone with her husband, so Princess Gina will sulk off to call “Steffie.” She’ll insist they’re going to need a new plan.

Other Days spoilers say Sonny Kiriakis (Freddie Smith) will confide in Evan Frears (Brock Kelly). He’ll confess that he’s angry with Will Horton (Chandler Massey) over what happened to Adrienne Kiriakis (Judi Evans). Sonny will get a few things off his chest before thanking Evan, who’ll assure Sonny he’s happy to provide a sympathetic ear. They’ll laugh about arranging a karaoke and football night later.

Days Of Our Lives Spoilers: Is Ciara pretending it’s over with Ben ? Trying to prove Victor guilty! https://t.co/y1SneZ8PLP pic.twitter.com/3uEgXRVATj

In prison, Days spoilers say Kate Roberts (Lauren Koslow) will visit Will and try to provide support. He’ll have a flashback of when he urged Sonny not to visit him anymore. Since Sonny can barely even make eye contact, Will knows how much pain he’s caused. Kate will assure Will that he’s not a killer; this was just an accident. However, Will won’t think that matters since Adrienne is dead, and he’s the reason why.

Kate will think Sonny can forgive Will eventually, but Will won’t be sure he can forgive himself. It’s clear that this ordeal has really taken a toll on him. Meanwhile, Days of Our Lives spoilers say Justin Kiriakis (Wally Kurth) will think back on Adrienne’s death. He’ll recall when Kayla Brady (Mary Beth Evans) told him Adrienne couldn’t survive her internal injuries and was gone.

Kayla will remember how Justin helped her move in her new condo. She’ll also have a DOOL flashback of Steve Johnson’s (Stephen Nichols) signed divorce papers arriving. Back in the present, Kayla and Justin will be glad to have each other. Love snuck up on them, and they won’t care about anyone who has a problem with them being together.

Days Of Our Lives Comings And Goings: Cameron Johnson And Victoria Konefal Are…

Days Of Our Lives (DOOL) Spoilers: Xander Has Advice For Nicole, Get Some Leverage…