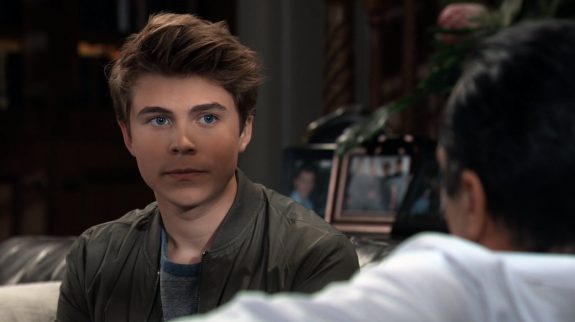 Anna Devane (Finola Hughes) comes home to find Finn and Hayden together. Violet comes in and asks Anna if she is a friend of her daddy’s. Hayden exits with Violet leaving Finn and Anna to talk. Anna stops Finn when he tries to explain. Violet hugs Finn and promises to see him soon. Finn doesn’t want Anna to think something happened and it didn’t. Anna is surprised the Finn hadn’t told her about Violet. Finn’s phone rings, he ignores it for Anna. Finn tells Anna about Violet’s illness.

Finn didn’t expect Anna to be gone this long. Finn says talking on the phone isn’t the same as sharing each other’s lives. It will take Anna a few days to adjust, Finn does too. Finn tells Anna she doesn’t have to worry about Hayden, his life is with her. Anna tells Finn how fatherhood will change his life. Finn gets called to the hospital. Finn doesn’t want to leave and promises to be back as soon as possible. Finn kissing Anna and leaves.

General Hospital’s Liz Webber (Rebecca Herbst) drops Cameron Webber (William Lipton) off to speak to Sonny Corinthos (Maurice Benard). Sonny asks Cameron how his hands are after punching the bag at the gym. Cameron thinks his workout there helped. Sonny tells Cameron he has every right to be angry. Sonny says we only choose how to react to what life throws our way.

Sonny asks if Cameron wants to be the guy that gets their friend drunk at a school party. Cameron is sorry but he doesn’t have an excuse. Sonny wants to know why he is supposed to believe that Cameron won’t do this again. Sonny questions Cameron about drinking and driving. Sonny tells Cameron he is going to have to make the smart and safe choice from now on out. Liz picks up Cameron and thanks Sonny for talking to him.

Neil says honor among colleagues. T.J. wanted to ask Alexis’ permission first. Neil understands. Neil suggests asking Alexis now. Alexis promises to get in touch with Olivia. Alexis tells Julian this isn’t about rats, its about everything else in his life. Julian has plenty to be upset about besides rats. Alexis says making fun of his stupid problems was fun. Alexis jokes about beavers cutting down the walls of Julian’s business. T.J. stops by Alexis’ room, T.J. follows. Alexis mentions the rats at Julian’s restaurant. T.J. tells Alexis that she could have been given rat poison.

General Hospital Spoilers: Kim Nero Has A Heart To Heart With Monica Quartermaine

General Hospital’s Kim Nero (Tamara Braun) comes to the hospital to say goodbye. Kim speaks to Monica Quartermaine (Leslie Charleston). Monica agrees that Kim and Franco Baldwin (Roger Howarth) are right to move away. Kim will never forget everything that Monica has done for her and her son. Monica and Kim talk about Oscar Nero’s (Garren Stitt) legacy. Kim thinks it’s a shame for parents to outlive their children. Kim didn’t want Monica to lose Drew. Kim knows she can never get Oscar back or the Drew that helped make him. Kim will try to persuade “Drew” to stay in touch.

Monica offers to go see Kim and “Drew”. Julian approaches Kim and says he doesn’t want to part this way. Julian claims to have acted out of love. Kim doesn’t believe anything Julian says. Julian wants them to part peacefully. Kim refuses to absolve Julian from his guilt. Julian says being Kim’s Charlie made him a better man. Kim says Julian was pretending to be someone he could never truly be. Kim tells Julian he doesn’t have to pretend anymore and leave. Franco shows up at Kim’s door.

General Hospital’s Jason Morgan (Steve Burton) is handling a shipment on the pier when Franco approaches. Franco talks about being a Navy Seal. Franco, as Drew, asks Jason if he grew up to be a hero because Franco already was one. Franco asks Jason how he holds onto the life of the guy who saved him as a kid. Jason tells Franco he won the right to make his own decisions.

Franco talks about how to survive water. Franco says this is not Drew’s body and he can’t do what he memory says he can. Jason stops by the hospital to check on Monica before changing for Sam McCall’s (Kelly Monaco) trial.

General Hospital’s Liz meets with Scott Baldwin (Kin Shriner) at the hospital. Scott tells Liz that he told Franco about his child abuse and how Drew saved him. Scott says he thought about kidnapping Franco and forcing the procedure on him. Hayden tells Liz about last night. Liz is surprised that Hayden doesn’t realize how happy Anna makes Finn. Hayden claims that Violet’s happiness should come first.