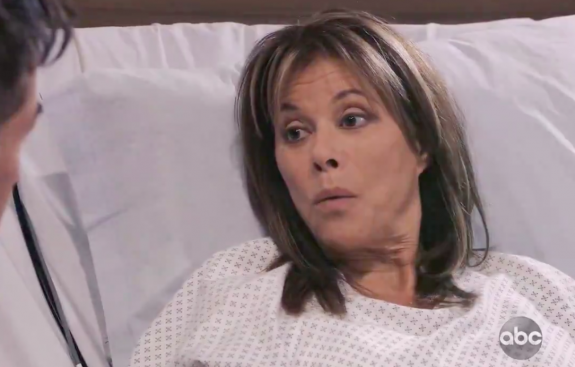 General Hospital (GH) spoilers for Monday, November 18, tease that Elizabeth Baldwin (Rebecca Herbst) will have a chat with Hamilton Finn (Michael Easton). At GH, they’ll discuss Anna Devane’s (Finola Hughes) return home and how things are complicated due to Hayden Barnes’ (Rebecca Budig) deception. However, Finn couldn’t be happier to have Violet Barnes (Jophielle Love) in his life. He’ll let Liz know that he’s got a lot to sort out with Anna, but he’ll feel confident they can all make it work.

GH Spoilers: Elizabeth Baldwin Will Have A Chat With Hamilton Finn

Over with Lucas Jones (Ryan Carnes), he’ll have some big news for Brad Cooper (Parry Shen). Lucas will insist he made sure Julian Jerome (William deVry) won’t be interfering in their marriage anymore. Brad will look surprised as he learns Lucas cut Julian out of the picture. It won’t be long until Brad pays Julian a visit and tries to hash things out. He’ll undoubtedly hope Julian doesn’t have any other tricks up his sleeve.

In the meantime, Julian will have another problem to tackle. He’ll be fed up with what he assumes is more Olivia Quartermaine (Lisa LoCicero) drama. On the phone, Julian will bark at Olivia’s attorney to control her client or else he’ll sue them both!

General Hospital Spoilers: Alexis Davis Will Get Confirmation On Her Diagnosis

Other General Hospital spoilers say Alexis Davis (Nancy Lee Grahn) will get confirmation on her diagnosis. T.J. Ashford (Tajh Bellow) just suggested rat poisoning may be the problem, and Finn will confirm it on Monday. Alexis will want them to tell her there’s a cure. She’ll just be eager to get back to normal – and Finn should help her out with that soon.

However, that still leaves the matter of who poisoned Alexis. Finn will urge Alexis to consider who might’ve been out to get her. She’ll come up with some possible suspects, but the real culprit won’t make the list. Fortunately, Neil Byrne (Joe Flanigan) will get a hint about Kendra Lennon’s (Michelle Argyris) guilt later in the week.

For now, Sam McCall (Kelly Monaco) will head to court and deal with her legal drama. General Hospital spoilers say Diane Miller (Carolyn Hennesy) will fight hard to get Sam off the hook. She’ll push the judge to see that this is a clear case of self-defense. Sadly, Sam may not like the verdict that’s brewing.

Next, “Drew Cain” aka Franco Baldwin (Roger Howarth) will devastate Kim Nero (Tamara Braun). It took a while, but “Drew” is realizing that he’s claimed a life that’s not his own. His life belongs to Franco, so he’ll try to help Kim understand.

Kim will expect “Drew” to go with her to San Diego and begin their new life together. She’ll be confused and heartbroken when she learns “Drew” changed his mind. As difficult as it is to let go, it seems “Drew” will remain in Port Charles and move forward with the memory procedure eventually.